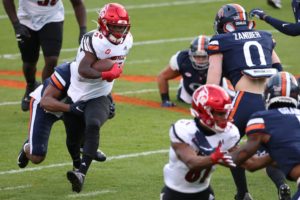 Let’s get this mea culpa out of the way at the get go.

I did not know that Calvin Prince in the mid 70s was the correct answer to the Aflac™ Trivia Question. Who was the last Cardinal runner to fashion consecutive 1000 yard rushing seasons?

I knew it wasn’t Bilal Powell, as one of the announcers surmised. Because Powell was somewhat of an underachiever until Charlie Strong arrived, and got him going in his last season 2010, before BP moved on to a significant career with the New York Football Jets.

Nor can I impersonate Nostradamus and say with any certainty that the outcome of U of L’s disappointing L to UVa might have different, had the Cardinals the services of several significant players.

The answer is blowin’ in this blustery Sunday morning wind.

What I do know is the battle surely turned on a pair of turnovers.

One early. One late. Both by M Cunningham.

But, you shall hear nary a discouraging word from me about the performance of Louisville’s signal caller.

I mean, he gained 197 net yards on 20 totes, as U of L’s only real rushing threat. And threw for another 161 yards without his main go to guy.

Cunningham, forced to do too much because of the absence of Atwell, Hawkins and Hall, stayed game until the end. You can only ask so much of a kid with way more weight on his shoulders than those protective pads.

His Pick Six early, after the Cards thwarted the Cavaliers with a 3 & Out on their opening possession, set the tone. It was a harbinger of the dreary day ahead.

Louisville came out as ready on O as they were on D. A couple of completions to Bradon Smith. One to Jordan Watkins for a 3d down conversion. A tough 5 yard rush by Maurice Burkley.

The gaffe in the 4th was more significant in terms of the outcome.

And, in my mind, more understandable.

Cunningham was working to make it work all day. But, he was pressured incessantly in key situations, sacked four times, and TFLed a couple others.

He was immediately put at a disadvantage on U of L’s fourth possession after halftime, when a False Start by Renato Brown put the Cards back five on the first play, after the D had held Virginia to a FG and only a TD lead.

On 3d & a yard at the Cards’ 38, Cunningham broke away and swerved and veered and reversed for 27 yards. One one last spin, the pigskin was ripped away from the obviously tiring Cardinal leader.

Fitzpatrick’s giveaway later hurt, but the game was already lost.

At the point when Louisville took a 10-7 lead in the 2d Q, the D had corralled a fumble and intercepted a pass on the previous two Cavalier possessions.

Marlon Character forced the former, and snared the latter.

This despite very little pressure from the DL, which was thin, wore down sooner rather than later, and crafted but a single sack.

The arc of possession time intrigues me.

I figure it’s dispositive of some incisive revelation, which I am too unastute as an observer, too numb from this understandable but disappointing campaign, and too worn down from isolating due to the virus, to be able to articulate.

I’m also fascinated by one of Coach Satt’s postgame comments.

“I told the guys, we’re scarring down right now. This adversity is scarring us down, and it’s going to make us a better program and a better team as we move forward, and we’ll reap the benefits of it. We’ve just got to continue working hard. If we stop turning the ball over, we’ll have a great chance to win.”

Looking forward to that Homefield Apparel T, after the Cards turn it around: “Louisville sCards.”

Having all the starters on offense will surely help the Cards score more, and more readily.

Having all the starters on defense will surely help the Cards stop their opponents more, and more readily.

Yet It’s looking like that’s not going to come about this season.