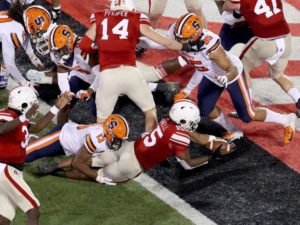 How bad a football team is Syracuse?

One has to wonder how on earth the Orange, for its only victory, bested Georgia Tech? By three scores no less.

The same Ramblin’ Wreck squad which battered U of L its next time out. By three scores+.

The University of Louisville Cardinals are a moderately better football team than its Friday evening foe.

The Cardinals, coming off back to back double digit defeats to ACC members from the Old Dominion, were playing without their one true superstar of the season, Javian Hawkins. Gone, he’s preparing to take his services to the next level. And a couple others on the depth chart, who have opted out.

So, back to the rhetorical query in the lede, how woeful are Dino Babers’ charges?

The Cardinals handed over the ball to the Orange on three different occasions before intermission. And still led 20 zed at the break.

So it obviously was. The final was a skunk: Louisville 30, Syracuse 0.

How rare are shutouts? A quick mini-researched small sampling reveals just one last weekend. IU over Michigan State. None the weekend before. And just two the weekend before that, ‘Bama over Mike Leach State, and Coastal Carolina over Georgia State.

Thus we feel comfortable deducing, in this world of big scoring pigskin, such ofers are few and far between.

Which is to say: Good on the Louisville Cardinals.

“To get a shutout and to win 30-0 is incredible. They’re hard to come by. We know winning is tough in college football, no matter who you are and no matter how talented you are. It’s tough, and you’ve got to battle to get these wins. We needed it the worst way.”

Thrown into action by Hawkins abdication and Hassan Hall’s needing to get back in game shape, former special teams guy, now starting RB Maurice Burkley averaged a a solid 5.6 ypc on 10 rushes.

Redshirt freshman Jalen Mitchell suggested he’s the Cards’ power back of the future. Well, actually, he is for the now. 46 tough yards on 11 totes. Plus three receptions.

Which brings me to my most pleasant surprise of the evening.

The redshirt junior’s prior career. Three catches in ’17. Redshirted in ’18. Out for the season with an ACL in ’19.

No receptions prior to Friday during this campaign. Had he even see any action? I don’t know. To be honest, I’d never heard of him. And he wasn’t listed on the roster with the number he was wearing.

Agent Zero, as Luginbill dubbed him, certainly made his mark last night. Surpassing his career total, with four catches for 40 yards. Two came on consecutive plays in the 2d for 10, then 16 yards, on the drive that led to the Cards 2d score.

Place kicker James Turner remains Louisville’s most reliable contributor. He connected from 33, 40 and a career high 50 yards without a miss.

Would love to have seen him have a go from 53 yards away, as he was set to do late. Until a Card false start forced a punt instead.

Anish Shroff and Tom Luginbill were actually in the booth, it appeared, providing energy, incisive perspective, and were a considerable improvement over the somnambulant duo that called Friday night games previously this season.

Derby City’s own Katie George was on the sideline. She did misreport, stating at one time that ‘Cuse’s injured QB JaCobian Morgan was going to be taken to Norton Audubon for testing, after his head bounced off the turf. After which report, he was shown several times sitting on the bench. She eventually corrected herself.

Louisville’s next battle is next weekend?

Whoever and whenever, I’ll be watching and dutifully report back.