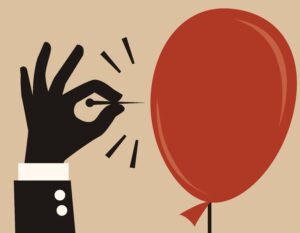 As hard as I tried to write out the time-clock-countdown music from the $64,000 Question, I couldn’t properly align the consonants and verbs, so it would make sense.

So, you, my loyal readers, will have to get in touch with your inner Hal March and conjure them on your own.*

*If you don’t even know the cultural reference I’m talking about, ask your Aunt Martha what TV show grabbed everybody’s attention in the mid 50s.

The point — yes this is about hoops — is that the Louisville Cardinals and their diehard fans are ticktocking along precariously, hoping the pins and needles they are sitting upon don’t burst the bubble underneath.

Six o’clock Sunday evening seems so very far in the future, especially when you keep looking at your watch every 68 seconds, and learning you have to root for a team with a coach you absolutely loathe, LSU, to beat Ole Miss. Because the Rebs are similarly situated to the Cards.

Which brings me to this, as I glomp on to the aura of another iconic TV show, and I direct this query to the hoopaholics residing in the Bermuda Triangle of College Basketball.

Answer in the Form of a Question: When was the last year neither U of L nor IU nor UK made it into the NCAA tournament?*

* Caveat emptor. Given my methodology, that may not be the right answer, and I shall gratefully, graciously and in all humility accept a correction should it be necessary. No digitized algorithms or database apps were used in my compilation. After looking up each school’s tourney history, I jotted the dates when they didn’t appear on a legal pad with a pen. Then, still only moderately caffeinated early this morning, I compared them, coming up with 1965.

That was Wes Unseld’s freshman year. The John Reuther/ Eddie Creamer-led Cards finished 15-10, and the last of a skein of hopeless seasons.

Even though Kentucky’s roster was filled with the fellows — Pat Riley, Larry Conley, Louie Dampier, Tommy Kron — who a season later lost the most famous game in history, the Wildcats were also 15-10, and outside looking in the windows of the Dance.

So, yeah, it’s been a long time. A long long time.

And, since the Cats and the Hoosiers both finished with losing records this campaign, it’s up to the Cards to hopefully see that 1965 (Or some other corrected year) remains the answer to the question.

I’ve just read the UVa is now out of the ACC tourney, because of positive test(s) within the program.

This NCAA tournament might not be the best ever, but it’s certainly going to be the most interesting and fascinating one of my lifetime.

And, as set forth in my gamecap about the Duke L, I remain curiously ambivalent about whether I really want U of L to Dance or not?

Or, so it would seem.

The Realist and the Diehard are battling inside.

And, as I look over the day’s schedule to plot out what to watch, I find myself seeking out games of teams Card fans should be rooting against, to ease the way for U of L’s name to be called Sunday.