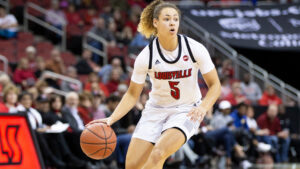 Which dictum, if you recall, reads like this: “You only play whom you play.”

Under normal circumstances, it applies to looking ahead in the bracket. Like, if in the gentlemen’s tournament, Houston finds itself peering past Oregon State, taking the Beavers for granted, while focusing on Baylor or Arkansas.

But, as we learned yesterday, it also applies to squad makeup.

Make no mistake, Jeff Walz’s Cardinals played their best game in awhile on Sunday, arguably its most complete all season.

But, they had help. In the form of Duck injuries and foul trouble.

Oregon was already playing without Te-Hina Paopao. Lost its Kentuckian PG Maddie Scherr in the first period. Then big Nyara Sabally in the 3d, just as her team was beginning to see a glimmer of hope.

Plus ace Sedona Prince committed two fouls in the opening stanza, and only registered 23 minutes of action.

Unable to find its footing early, the Ducks fell prey to the Cardinals, and were doubled up in the half: 29 U of L, 14 Oregon.

Focused in, the Louisville Cardinals were ready to carpe diem.

Seize the day they did, advancing for a date with overall top seed Stanford on Tuesday.

U of L kept Oregon measured all evening.

When the vanquished pulled within 6 with 9:14 to play, the Cardinals turbocharged.

U of L ran off 13 in a row, including a couple of Dana Evans’ ICBMs.

Cardinal star Evans finally escaped from the freezer she’d been in recently.

And, I mean that somewhat literally.

Evans has been undergoing cryogenic therapy. Which I learned from a pal, doing the same, who ran into her at the freezer chest.

Apparently you enter the seriously chilly chamber, in which the Fahrenheit is something like -160 degrees or so. Where you stay for a minute and a half or thereabouts. Or, so I’m advised.

I’m not sure what the benefits are purported to be. Getting rid of aches and pains or something like that. Maybe. I asked my pal when he shared he was trying it out, whether he ran into Ted Williams head?

Be that as it may, the Cards’ leading scorer unthawed at the right time.

After not scoring in the 1st, Evans tallied 13 in the 2d; 29 for the tilt. (Which, if one discounts the opening period, works out to a smidge under a point per minute.)

She frankly can’t shoot a lick.

But, to borrow some analogies from the gentlemen’s program, she’s a combo of Ellis Myles and Dwayne Sutton. Plus.

To offer that she gets up close and personal with the foe she’s checking would be understatement of the highest order. She’s in the middle of every battle for a loose ball. Diminutive, she still holds more than her own on the boards. She can pick a pocket.

She’s the gritty catalyst for the whole deal.

Oh yeah, she also goes behind her back. Should you need evidence, check out The World Wide Leader’s Top Ten from Sunday night. The panache at mid court reminded me of something Pete Maravich would do.

Next: The Cardinals versus the Cardinal for a spot in the Final Four.