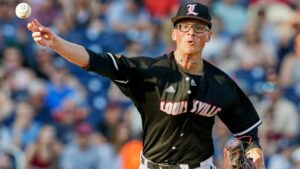 It doesn’t always start with The Stare.

But when it comes, that glare, with enough blow-torch heat to weld batters hands to the bat, making proper swings impossible, it is a pitching spectacle.

Amplified by those bug-eyed sports spectacles, the signature scowl is trouble for foes, and a delight for Cardinal fans.

On Sunday, when the Cards blasted UVa, 8-2, the Stare was there.

Luke Smith was On!

In the series decider, Smith took awhile to find his groove. He surrendered a single in the 1st, another in the 2d, along with one-out two-bagger.

But didn’t allow a Virginia tally.

Then he proceeded to mow down 14 Cavaliers in a row.

In the bottom of the 7th, the first two Virginia batters singled.

Silly me, I thought Dan McDonnell would come with the hook.

At that juncture, I was out running errands, following the proceedings through Sean Moth’s radio call on The Ville. So, I don’t know if Coach got out of his seat, got to the edge of the dugout, and was stared down by his hurler.

My guess, no. Even though Smith was approaching a hundred hurls.

When Smith is on, he’s on. And he’d obviously found his groove. McDonnell knows it.

Plus, Louisville was up 7 nil, thanks to a Lucas Dunn RBI in the 4th, and 5 run blitzkrieg in the 5th, highlighted by a Trey Leonard homer and a run-scoring double by hot Alex Binelas, and Binelas’s third homer in three days in the half inning before the stretch.

Smith got a fly out on an 0-1 count to the next batter. Then forced a fielder’s choice out at 2d, that might have been an inning ending double play. Then struck out a pinch hitter swinging, to end that potential comeback.

The home nine finally got to That Guy in Glasses in the next frame. A leadoff single and an ensuing homer ended the winning pitcher’s day, after 102 pitches.

On the mound, reliever Cameron Robinson, got the hold, as he finished the inning with zeros across.

Closer for the day, Garrett Schmeltz held UVa to three up three down to close it out.

The Sunday W gave U of L another ACC series. It coulda woulda mighta been a sweep but for an unfortunate walk off error on Friday night.

It’s the first time I’ve listened to a Sean Moth call this season.

In the tradition of the position, he works alone.

He’s pretty good, unlike when he was hyperbolic at the mic for Cardinal hoops, regimentally understated on 93.9 to suit the game of baseball.

Sometimes, he’s a might too cute, trying to fashion erudition out of extraneous information. But it’s a small plaint.

It’s nice to know he’s still on the play by play for the surging Cardinals.

He wasn’t comfortable. Never found a rhythm. Made the telecast flat.

But the Cards evened the series that day, so it sounded fine for U of L faithful.

Poole knows the game, and was much better on Sunday with sidekick Melanie Mitchell, herself an astute observer.

Read an article this morning by a fellow who would deign to be, I suppose, the Mel Kiper of the MLB draft.

He opined that Cardinal catcher Henry Davis should be the first pick in the upcoming draft, instead of either of the odds on faves, Vandy hurlers Jack Leiter or Kumar Rocker.

Who am I to disagree?

Next: Kentucky in Lexington Tuesday.

The expected snow may be too much. If not, Binelas just might have to part the flakes and go yard like Miggy on Opening Day in Motor City.