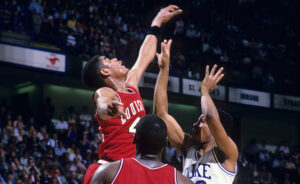 Well then, I’d best get to it.

(Fortunately, I learned years ago how to spell the coach’s name, without having to look it up.)

This is not an onerous task, frankly, since my beloved University of Louisville Cardinals hold a unique position in the collegiate hoops universe.

Standing 9-7 against the Blue Devils since the commencement of the Krzyzewski Era in Durham, U of L is the only school which has played at least nine games against the GOAT with a winning record against him.

As disappointing as the last COVID campaign was for Louisville, Chris Mack’s Cards still captured 2 of 3 against the Golden Arches-laden Blue Devil squad.

So, yeah, in the context of diehard fandom, the Cards have owned Coach K. Including the fact, they won the two encounters of consequence.

The Jeff Hall to Pervis Ellison pass for the putback to win U of L’s second national title.

Other than the victory and title, my favorite memory of that one in retrospect came when Jay Bilas was in town for a press conference, early in Pitino’s stay. I asked him about the game.

“If you recall,” he responded, “our team was being talked about as one of the best ever.”

My rejoinder was something like Denny Crum’s to Bobby Knight, when the IU coach proclaimed “Duke is the better team.”

“They weren’t that night.”

It was for the Midwest Regional crown, on the way to U of L’s third national title.

It is also known as the Kevin Ware game.

My favorite stat of that ’13 W is 14-12. That’s the score from the moment of Ware’s injury to the end of the first half. Totally distraught, the Cards dug deep and outscored Duke for the rest of the stanza.

Russ Smith, spotted sitting on the court crying during Ware’s triage on the court, finished the game with 23. U of L dominated the second half, 50-31.

My work is done.

I shall look forward to my BABBLE membership renewal forthwith.

1 thought on “U of L Cards have Owned Coach K”