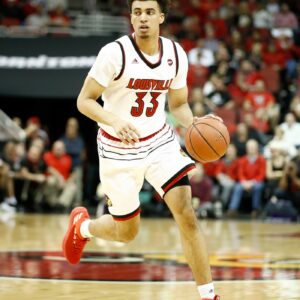 Brother, can you loan me a dime?

When I attended kindergarten at Belknap Elementary, I had to be vaccinated against all sorts of stuff. I remember going to the Armory with my mother, for the polio vax on a sugar cube.

Every state still has mandatory vaccinations before a kid can sit in class and start to learn how to read. Diptheria. Measles. Rubella. Chicken Pox. Hepatitis B in every state except Alabama. Others.

So, given how this whole COVID vaccination process has turned sadly into a political football, and the repercussions are starting to kick in, I thought I’d inquire how the athletic department at the University of Louisville is doing on this front?

To find out whether they are being as vigilant on the Belknap Campus as I had to be at Belknap Elementary?

I emailed Senior Associate Athletic Director Kenny Klein, who is the Gold Standard when it comes collegiate information directors.

My simple query: “Would appreciate learning what percentage of Cardinal athletes, coaches and staff are vaccinated for each of the men’s and women’s sports? Are those numbers available?”

His straightforward response: “I’m sorry, but I do not have that information.”

Kenny’s a pro’s pro. If he says he doesn’t have that info, I have no reason whatsoever to doubt him.

How disturbing that the school isn’t keeping track.

Let’s keep our fingers crossed that the numbers are actually significant, hopefully close to or at 100%. And that there aren’t any shutdowns during the upcoming seasons.

OK, this has nothing to do with sports, but I can’t help myself.

I’ve been addicted to rock & roll since the mid 50s. I attended my first concert in the summer of ’62, and have attended, what, thousands? since then. I am blessed to have heard live just about everybody of importance through the decades.

Several summers back, Tedeschi Trucks Band joined with Trey Anastasio at the Lock’n Festival and played the entirety of “Layla and Other Assorted Love Songs.”

I was not present at the festival. But a CD of the gig, “Layla Revisted,” has just been released.

It is transcendent. I believe it to be the best live set of music I’ve ever heard, either in person or recorded.