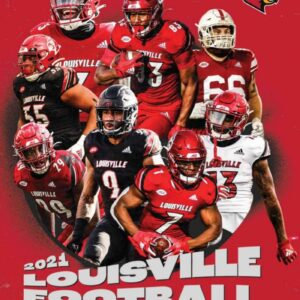 As if that’s unique to Floyd Street football.

To mention that behemoth above again, the school that’s won, what, 15 of the last 18 national titles, or close to that, here’s a stat for perspective. Nick Saban’s had five different OCs in the last 8 seasons.

Without missing a beat, because, you understand, Roll Tide is the Amazon of College Pigskin.

So, yeah, assistants, are always movin’ on. Unless your name is Bud Foster. School’s adapt.

So, to share my ‘umble opinion as I’m wont to do, that doesn’t bother me.

Baseline here. I’m looking ahead. Plus, I’m more hopeful about the upcoming Cardinal season than most. Though, to be fair, that’s based on, well, as FDR said, “The only hope we have is hope itself.”

Here’s one of the bases for my positivitude. The Cards shall contest 7 of their games in the friendly confines of Cardinal Stadium.

Eastern Kentucky, Central Florida*, Virginia, Boston College, Syracuse, Clemson, and Arch Rival from Down the Road. The latter, minus the Wildcat 6, one would think. Unless the Fayette Circuit Court puts those Big Blue pigskinners on a Rocket Docket, and fully exonerates the half dozen.

*A note to those Knights fans, who are pissed I didn’t call the school UCF, as they prefer. Guess they don’t like the directional thing. Anyway, you Orlandianianins, there’s only one school worthy of going by its initials, starting with a U. UCLA. Period. Uh, okay, maybe UNLV, or perhaps UTEP. But not that new school growing like kudzu in the middle of the Sunshine State.

The Cards opener is that neutral site battle against rising Ole Miss, the preseason Flavor of the Month.

The four games in enemy territory are all winnable.

While the Cards have suffered defections — like every other school, which has to deal with a little thing called “transfer portal” — there’s plenty of talent and experience returning.

And, long snapper Mitch Hall. Yes, the other end of that equation, punter Logan Lupo’s taken his talents, such as they are, to Boca Raton to kick for the Florida Atlantic Fightin’ Schnells. Not a tear has been shade among those wearing red and black.

Especially since his replacement Mark Vassett is an old fart from Down Under. A good thing. Those Aussies know footy.

So, there’s the maturity factor.

So, off the top of my head, without an X or 0 of digital data to present as evidence, my thinking goes like this.

Cards drop 2 of first three. If that’s EKU, heaven forbid, all bets are off.

Go 2-1 against trio of Seminoles, Demon Deacons and Wahoos.

Sweep BC and NC State, then fall prey to the inevitable against the Dabos.

Before sweeping the last three, which includes a huuuuuuuuge W over You Know Whom.

1 thought on “Cardinal Football is Close, Some Thoughts”