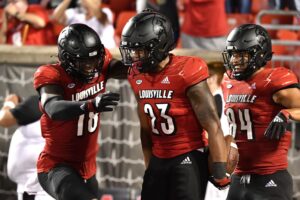 Talk about being in the wrong place at the right time.

Though, not quite the same, lyrically speaking, I can almost hear Dr. John on a night of a full moon at Tips.

You might have heard of Jaylin Alderman by now.

He’s a part of Cardinal pigskin lore, you understand.

Of the freshman LB’s significant heroics in U of L’s stirring 42-35 W over the (Not So) Golden Knights, Scott Satterfield, still observant while flush with the thrill of victory, said, “He sits out there in the flat, the ball gets tipped right to him, he’s not even supposed to be there, he catches it and goes and scores a touchdown.”

So, let’s break down Alderman’s contribution to the U of L W.

So, jacked to the max after midnight, unable to sleep, I wondered if there might be some sort of defensive equivalent for QB Ratings.

So, I checked out how the NC2A figures such for signal callers.

So, I gave up that idea.

Then I went to the Media Guide, so as to be able to provide you, my loyal readers, with some background on the rookie from Valdosta, Ga. I could find no bio.

In the light of day the morning after, I finally realized there are a few bits of background info, which I missed. Ah, how the mind reels and rocks and rolls when the ecstasy of victory kicks in. He was a Class 1-AAAAAA All-State in the Peach State, etc, etc, etc.

More germane is what his coach said, when asked why he was in the game.

“The reason why he gets to get into game is because he is as smart as any one of our linebackers. He’s a true freshman, but he studies everything and he just knows what to do when you put him in. That was a little bit different circumstance because we’re in prevent mode. They got the ball right there and you don’t want to give up a touchdown. But, that’s why he went in because we felt like he knew what to do in that scenario.”

So, yeah, Jaylin Alderman, welcome to the Ville.

Such is the nature of Louisville’s win on Friday Night Prime Time, as satisfying and needed a gridiron triumph as any in recent memory, that I’m inclined to gloss over any specifics.

Though I guess I’ll get to a few in a bit.

First, though, because it’s what we do at such joyous times as these, I gotta call out a couple of Cardinal Peeps, Both of Little Faith.

First to P.D. Pete, now residing in the Land o’ Spuds, who offered this FB observation earlier in the week:

“Cards will drop to 1-2 Friday as painful as it is for me to acknowledge this. UCF is on their Big 12 high and we need a new coach. Weber, Cooper and Kragthorpe are 3 names I’d rather forget. You can throw Satterfield on that list.”

His assessment of Coach Satt, shared unfortunately by many of the faithful, at least before You Know Whom’s Pick Six, is dead wrong.

Hear me now (again) and believe me later, Scott Satterfield can coach. Period.

Then there’s Bookstore Billy. Who apparently is still suffering PTSD from an opening week loss in Camp Randell by his beloved Badgers, and that Packers’ lay down in their opener.

He texted me at 7:54, after Central had scored in 13 seconds on their first drive, and U of L had gone 3 & Out on its first two possessions, both times completing 3d down passes short of the line to gain.

His full text: “We are going to get killed.”

Let’s just say that after the win, I expressed my displeasure with his lack of patience, in such a manner that I gave myself a sore throat. True. And, well worth it. With a little garble, now gone.

Shame, shame, shame on you. (Feel free to cue up my favorite disco tune by Shirley & Company.)

OK, a few actual notes about the game.

No words can describe how Satterfield managed the team in the lead up to the game, kept them in it, and called some great plays for the W.

Bryan Brown’s defense, as we say, bent but didn’t break. Though they allowed the visitors a couple of quick scores, they stopped Central when it mattered.

U of L established its game plan with authority before intermission.

Plus the Cardinals took advantage of a weak 26 yard punt, the resulting great field position, and scored a go-ahead TD in 1:31 with only :22 left on the clock.

With the score knotted in the 3d, after holding the (Not So) Golden Knights to a 3 & out on their 2d possession, the Cards retook the lead at 28-21, with an air attack.

Q Cole’s downfield deflection on the visitor’s third possession after the break was HUGE. So too, Gus Malzahn choosing to punt at the Louisville 45. And, of course, that Braden Smith to Trevion Cooley trickeration for a 35-28 advantage.

U of L only had 46 penalty yards. No False Starts.

M Cunningham had 80 more yards passing than heralded (Not So) Golden Knight Dillon Gabriel. 10 different receivers caught a pass, led by Marshon Ford’s eight for 100 yards and a score.

M Cunningham had only 2 less yards rushing (99) than the (Not So) Golden Knight’s leading toter of the pigskin. 101. Jalen Mitchell gained 74 tough, critical yards on the ground.

Then, fortuitously got dinged, allowing You Know Whom to get in for that one game-winning snap.

Ah, how we can joke, when flush with an improbable win.