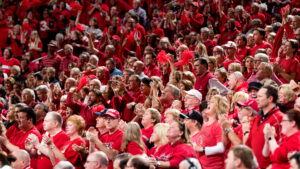 But the fever has broken. For now anyway. Enjoy.

Which is what happens when your favorite football team scores a Friday Night upset, on national TV, with a last second 66 yard pick six. After a give away on the previous play.

From the agony of defeat to the thrill of victory in a flash. It was as if the clouds lifted over Cardinal Stadium, and the heavens turned into starry, starry night.

And, then came that Hoops dog & pony show the next night under the Twin Spires.

In front of 20,000 plus. Give a raise to whoever came up with the brilliant idea to stage the event at Churchill Downs.

Coach Mack paid his respects to Hall of Famer Denny Crum, entering with that rolled up program. The 86ers were in the House.

May the Men’s team wear those throwbacks Every Game.

And, let’s hope the Women tell adidas, “Uh, we appreciate the effort, but, ya know, gold is not a U of L school color.”

This during the same week that U of L’s undefeated volleyballers beat the defending national champs — that school from down the interstate — and perennial power Nebraska. In Lincoln.

Ws over a tandem of Top 10 teams in a span of three days.

The women’s futbolers are 5-1-1, with the draw coming against a Top 20 foe. While the men’s soccer team has won 4 of their its five.

Maybe all this is short lived.

Basketball is still weeks away.

The pigskinners visit to Tallahassee this Saturday is fraught with peril.