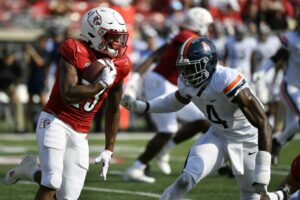 In the aftermath of Louisville’s come-from-ahead 33-34 defeat to Virginia, many Cardinal fans turned into bilious characters from “Venom Let There Be Carnage.”

Most of the disgust aimed at Scott Satterfield.

As well as the defensive scheme that allowed UVa to come back from a 13-30 deficit, tally 21 in the 4th and steal away with the win.

“Why do you keep rushing 3 with the opponent out of time outs and a
quarterback that makes Zorro look like a hack?”

Those are just the missives I received postgame which are printable.

I too wondered, more depressed than disgusted after the L, why Louisville didn’t come with more pressure late?

They had sacked Brennan Armstrong 5 times. They’d forced a couple of picks during that boffo 3d Q.

Upon awakening early this morning after to meet my contractual obligations and provide this take, I believe I’ve got a bit of perspective on the defeat. If I am no less despondent about it.

There are reasons why the U of L staff planned and played as they did. Or, so I would surmise.

As Coach Satt explained, if you put pressure on the QB, you have to play man at the back end.

That’s 311 of Brennan Armstrong’s 487 passing yards. (Only Wildcat Tim Couch in the Cardinal Stadium premier ever threw for more against U of L.)

Which is to simply point out this reality. When Louisville played man D, they were seriously outsized, were at a noticeable physical disadvantage.

Playing zone in hopes of minimizing those disadvantages, they were simply outschemed by Mendenhall, outplayed by savvy vet Armstrong and his receivers.

None of this is meant as an excuse. Just trying to understand the true underlying reasons.

UVa ran 24 more offensive plays than the Cardinals. 86 to 62. The winners had a distinct time possession advantage. Especially in the decisive 4th Q, when they had the ball for 9:32 of the final 15:00.

Which is to suggest that despite putting 33 on the scoreboard, Louisville’s offensive is just as much responsible for the defeat as the D. Several more 1st downs, and trading one of those treys for a 7 spot would have meant victory.

Cardinal defenders were simply on the gridiron too much, especially late. They were gassed, and that affected whatever the scheme in place.

I can’t tell you how glad I am that the team and the fans get a week off.