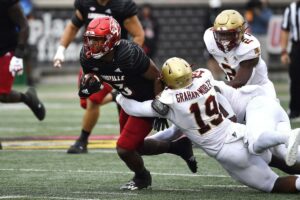 Which clichéd overuse of cinematic-inspired snark is a too cute attempt to advise I’m not really an analytics guy in this age of slash lines, abbreviated percentiles and player by player numerical evaluations.

Yet admittedly, some numbers intrigue me. Especially one set that’s evolved to increasingly greater usage out of the world of pucks in recent years.

It may — may — provide some eccentric explanation for U of L’s slog of a 28-14 W over Boston College Saturday in disarmingly empty Cardinal Stadium.

I’m talking about the concept of +/-.

Which seems to me to be a legitimately revelatory stat. Maybe. Perhaps.

Like I mentioned, It evolved from hockey. And is now in basketball box scores. How teams fare score-wise when a certain player is on the ice or court.

Bear with me, I’m going to get to Malik Cunningham and Trevion Cooley and the Cardinals. Patience.

But I want to start with the Golden State Warriors’ victory the other night over the Clippers. The winners were led as usual by Draymond Green and the astonishing Steph Curry, who scored 45. Which included a couple of late game long range ballistic missiles from the center court logo.

I was taken aback when I noted that Green was -7 and Curry -2.

Do those anecdotal bits of data — Sorry, the devil made me use the term — undermine the concept of +/-. Am I, and those who pay way more attention to numbers and algorithms, just trying to extrapolate something from nothing???

Which brings me to . . . one point during the Cards’ much needed victory, when they’d coughed it up three times. A Hassan Hall fumble, and two bad throwback to last season Cunningham picks. But the Eagles had tallied zero points.

While U of L scored 7 after BC’s lone turnover to that juncture, a Trey Franklin interception of a Dennis Grosel toss.

So, the Cardinals were +7 with less opportunities.

Hmm, thought I, is there some way to calculate the effect of turnover margin/ scores off turnovers +/- into a meaningful, telling statistic?

And, there may be. I’ll leave it to the math PhDs in Tuscaloosa to figure out.

What I can say about Saturday’s game is that the Cards turned it over an alarming four times, but only gave up 7 points after said mistakes. While scoring a TD after one of only three BC gaffes.

What does it mean, Mr. Wizard?

Where is Don Herbert when we really need him?

What I do know is that a sequence of turnover/turnover early in the 4th could have turned the rain-soaked encounter into another U of L finding a way to lose late lament.

The visitors converted a 4th & 5. Then got another new set of downs, making the necessary yardage on a 3d & 14 at Louisville’s 29.

Then Josh Minkins nabbed a YaYa-batted, wobbly, errant Grosel throw in the end zone. Unfortunately, instead of taking a knee, he mistakenly ran it out, getting downed at the 2.

Then, on first down, Cooley, who had a boffo day with 112 yards on 13 carries, broke one for 16 yards over the left side. But had the wet ball knocked out from behind for the Cardinals’ fourth turnover of the day.

Two and a half minutes of game later, the Beantowners were in the endzone, and behind but a single score. With over six minutes left in the game.

It was time for Louisville’s offense to muster some swag.

Which they had not done a bit in the second half.

Which they did do when they had to for victory.

Cunningham and the O Line showed they were up to sealing the deal on the first play, a 14 yard QB keep.

So was Eagle Jaiden Woodbey’s stupid face mask grab after a whistle, which moved the Cards to a 1st down on the BC 21.

During the timeout before Louisville’s 3d & 3 at the BC 14, I wrote “Biggest Play of Game.” Duh, sometimes I am so so very astute.

I would have been happy with a first down.

To all the fans who war down on the program, and apparently there are a lot, given all the empty seats, take note.

It seems each week, names we haven’t heard before, i.e. new guys, are making key plays.

Things may not be as gloomy as those drenching late afternoon skies.

Especially with the Cardinals celebrating a had to have W in the rain.