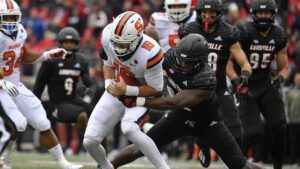 Incredibly talented. Legitimately humble and grateful. Truly decent. Absolutely deserving of every accolade for his play and life here in Louisville, and in Baltimore.

But, for all of those feats he performed on the Cardinal Stadium turf, I’m not sure he ever threw TD aerials as perfect as some tossed by Malik Cunningham against the Orange.

After the 41 yarder to Jordan Watkins, I wrote in my notes, “Great Pass.” After watching a replay on the screen, I added, “Perfect Pass.”

The scoring throw to Tyler Harrell was similarly beauteous.

My favorite might have been the short one to Ahmari Huggins-Bruce from six yards out. It was a play when Cunningham, given the space, would have normally tucked and run it to paydirt. Instead, roving to his left, he flipped a perfect little spiral for the score.

In the first half, after which the Cards had a comfortable 35-3 advantage, MC’s passer rating was 277.3.

Maybe those of you better at arithmetic than me will wish to figure it out. Here’s the formula:

Jalen Mitchell and the Offensive Line stamped their signatures on the game from the get go.

Two plays later, finally running a different play to the right, the Cards were in the endzone.

Louisville never looked back. The rout was on.

Oh yeah, Mitchell ran for 102 net yards on the day.

The visitors only got two more first downs before the Lamar Celebration at the half.

Here’s the totality of Syracuse’s futility against Louisville’s Defense. Their drives the rest of the day ended like this.

Second Half: Fumble. (On 4th & Goal at the Cards’ 2, during which recovery, Greedy Vance came within a grabbed shoelace of taking it 95 yards to the house.) Downs. Punt.

The Cardinals garnered 8 Tackles For Loss, including a couple sacks.

I’ve named a few Cards who stood out.

Which is, to be honest, not fair.

Copied from the official box score, here are U of L players who participated, but didn’t start:

For all the grief they’ve gotten from an impatient, disgruntled fanbase, the coaching staff deserves some dap.

Scott Satterfield. Bryan Brown. The whole lot of them

Given the heartbreaking close Ls recently, it was masterful work fashioning the squad to give the kind of performance they did Saturday.

No penalties in the 1st half. Only three for the game.

Was it the first time this season the Cardinals ran that little TuTu flip shovel pass, this time to Huggins-Bruce? Went for 9 yards on 1st down on U of L’s second drive of the day.

During Thursday night’s NFL telecast, Louisville got some good pub. Joe Buck and Troy Aikman were praising Lamar and Johnny U and the school that spawned them.

Next. Duke. Thursday. In Durham.