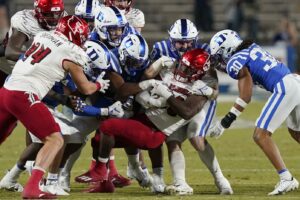 So, it is obvious where this recap must begin.

How about that Riley Leonard kid?

The Blue Devil real freshman signal caller entered the fray on his team’s second drive of the 2d half, and immediately energized his previously moribund mates to within conceivable striking distance.

He was perfect through the air. Literally, not figuratively.

He toted the pigskin seven times for 70 yards. Included was an elusive 35 yard scamper to paydirt.

He was a breath of fresh air for his team, coached by a fellow, revered Manning whisperer David Cutcliffe, who looked for all the world like a man ready to turn over his head set for someone else to take charge.

Hee, hee. I know, the Leonard guy has promise, but OK yeah, it’s a joke. An attempt at some gotcha humor as I write this on too few hours sleep, as the sun rises behind the bay window on the other side of this computer screen.

As the talking heads in the studio were throwing the feed to Durham for kickoff, one of them called what was coming up, “Must See TV.”

He was referring to Malik Cunningham.

Then during Matt Barrie and Roddy Jones intro, Jones, who is pretty good by the by, referred to Cunningham as “Superman.”

After which the University of Louisville centerpiece QB indeed went full Clark Kent.

The numbers, as glaringly glossy as they are, provide merely an outline.

He was responsible for seven of the Cardinals’ touchdowns.

Five were aerial. A couple of those were deep, precise, awe inspiring spirals. The kind that leave your mouth open, like when Steph Curry bombs triple after triple from 40 feet.

A 48 yarder to Trevion Cooley.

A 20 yarder to Marshon Ford.

A 19 yarder to Jordan Watkins.

A 12 yarder to Ahmar Huggins-Bruce.

A 36 yarder to Tyler Harrell. Like the hair of the werewolf drinking a piña colada at Trader Vic’s, the pass was perfect.

And that wasn’t the most spectacular part of his game.

His 72 yard run to paydirt shall go down in the annals. Circuitous. Serpentine. Elusive. Crafty. And, the highest praise of all, the equal of any by MC’s mentor Lamar Jackson.

Cunningham also took it all the way from 44 yards away.

To be honest, Duke’s defense is horrible. That being said, Cunningham’s performance was legitimately magical. The best by any player in the sport this season. The best statistically by a collegiate QB in decades.

Cunningham is occasionally compared with the aforementioned Heisman winner Lamar Jackson. That’s certainly not fair. And hard for me to admit, appropriate.

But for one night in Durham, North Carolina, well, I mean, OH! YEAH!

Marvin Dallas’s pick was righteous. He had to be aided off the field late with an injury. Hopefully, it’s not serious. But he sure seemed to be hurtin’.

Chandler Jones, CJ Avery, Q Cole and Greedy Vance all had 8 tackles to lead the again solid U of L D. YaYa Diaby forced a fumble, which Ashton Gillote recovered.

U of L scored after both turnovers.

When the Cards only punt of the game was blocked, giving the Blue Devils a short field at U of L’s 41, they regained possession with dispatch. Great pressure. Dallas’s interception.

U of L scored on every drive of the game, except its second, and the last one when 3d string QB Brock Domann was taking knees to get to the final gun.

Duke was certainly the right foe at the right time.

The now six W Cardinals did not need the added angst of bowl eligibility pressure heading into Rivalry Week.