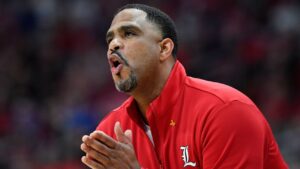 It’s time for the Red & Black Faithful to mine for some optimism, don’t’ you think?

To take a moment to thank Naismithius for the little gifts that have been offered in the last week of this soap opera season.

Which bestowals have generally remained unopened, because . . .

. . . because, fostered by the Ayers/ Covington/ Clougherty triple double pillage of the Carolina game, fan frustration boiled over into a din of vent.

Four Ls in a row, seven in the last eight, including the last two coulda woulda shouldas against the Blue Devils and Tar Heels, the leadership transition (such as that governance was), a captain MIA for mysterious reasons, and the dam was ready to break.

I’ll be honest, I’m not sure what the ceiling is for this edition of the U of L Cardinals. Frankly, I’d settle for more victories than defeats and a spot in the N I One T.

Believing Louisville could run off enough Ws in a row to capture the ACC Tourney title seems an impossibility.

Yet, attempting to climb out of the post-Carolina mire, I’ve pulled out my game notes from Tuesday, checked the box score, put in a call to the spirit of Peck Hickman, all in hopes of considering some +++s that Ls Up have glossed over as we’ve vented our spleen over the those darn zebras.

Jae’Lyn Withers. He clearly played his best game of the season. From the get go.

He entered the fray at 13:58 of the 1st, the Cards, after a nifty start, up 14-10. On his first possession, he aggressively swiped an offensive board after a missed Cardinal FT, and followed with two.

Next trip down, he had the ball beyond the arc, instead of triggering from long range, he feigned a trey, drove hard to the hoop for another deuce.

He was engaged on defense.

With two blocks. The last of which, with :02 on the clock, was damn sweet and game-saving at the time, sending the battle to OT.

El Ellis. For obvious reasons, at least for me, he’s oft compared to Russ Smith.

If he sticks around, he could become a beloved Cardinal. As of yet, he’s no Russ. Unlike Mr. 2diculous, Ellis wasn’t schooled on the take no prisoners asphalt of NYC. Yes, they got some ballers along Tobacco Road, but there’s no better schoolhouse than Rucker for a shortie to learn how to finish at the rim.

But, like He Whose Number Now Hangs In The Rafters, El Ellis can take over a game.

He’s done it before in a Cardinal uniform.

And tried his best, and almost succeeded against the argyled Baby Blues. Perhaps too much. Interim coach Mike Pegues obviously gave the JUCO transfer the proverbial Carte Blanche.

Dominating the rock Carlick-style in the 5 Out set Pegues was running, El kept the Cards and fan base in it.

I’d love for him to give it up a bit more. His mates on the court did a lot of standing and watching EE do his thing.

But, this is about the positives, not to pick nits.

If Ellis keeps evolving on offense, and plays some D even approaching #2, Ell Ellis is a keeper.

Matt Cross was a man possessed.

He was relentless. There’s a reason he had five and a half more minutes of PT than any other Cardinal.

Sydney Curry is a warrior.

U of L’s bench outscored North Carolina 44 zed. Not a typo.

The Cards were also 13-0 on fast break tallies. Correct. With Roy Williams watching in person and Dean Smith spinning in his grave, the Tar Heels did not score on a breakout.

He and staff had the team ready, more focused, engaged and energetic the last couple games than all this season. Or last season, frankly.

He didn’t mince words after the game about his significant gaffe, or matters with the players that need cleaning up.

I like the offensive tweaks. I assume there shall be more.

I hope that the last two supreme efforts ending in defeat don’t diminish the rebirth of the ’21-’22 season.

One last fascinating aspect of all the post Carolina game dialog.

Thanks to Smart Guy, who goes to other chat rooms and twitters, et al, for pointing this out.

Not once, literally not figuratively, not once did he or I see one single mention of Malik Williams’ absence. No, “If Malik were there blah blah blah.”

Just another weirdiodity. As if we needed more.

This Louisville Cardinal season on the brink of something or another remains intriguing, as it continues to be a work in progress.

6 thoughts on “Moving On to A Hint of Hope”