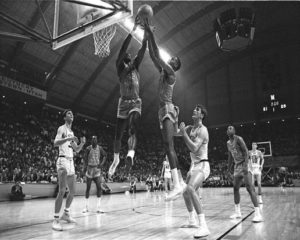 One more mea culpa. During a commercial break of “Around the Horn,” I flipped over to the UNC Wilmington/ Middle Tennessee title tilt of the Roman CBI thing. Fortunately it was halftime, and I quickly switched back. But not before noting that Joe “Mr. Irrelevant After Selection Sunday” Lunardi was doing color.

The 2d half of A&M/ Wake is on in the background as I knock out this tome.

Advance Warning: Don’t be expecting anything but diversionary musings here in advance of Thursday night’s tips.

As we have in the past, Doc and I played what if the other day.

As in, what if Jay Wright replaced Denny Crum instead of You Know Whom?

My memory is he took the Villanova gig around the same time as RP made his triumphant return to the Commonwealth, and into Terry Meiners’ open embrace. But it might have been days/ weeks in advance already. Besides Wright’s a Philly guy.

Anyway the conversation veered into the territory of attire. I noted that Wright’s adopted the new dress down code. To which, Doc mentioned the shibboleth that JW was “the best dressed coach in college basketball.”

To which I demurred. Wright always showed sufficient cuff, white at the collar. But, I never thought his suits were in the same league as Pitino or Pat Riley.

His suits never had the drape of those guys. So I observe. Drape matters. When it comes to haberdashery.

After which meaningless story but peripherally connected to college basketball, I reiterate my warning from above: Diversionary musings.

Wonder how N.C. State is feeling?

A #1 seed, the Wolfpack have to try to advance in a regional in Bridgeport, Connecticut. Which foursome includes Geno’s Huskies.

How fair is that?

The women’s tourney will not display maturity until highly seeded teams don’t get to play at home in the first two rounds. Or things like this happen.

That said, U of L won a natty, playing its first two in Lexington, and regional in Indy. UCLA played its openers in Pauley a bunch of times. UK won in ’58 without leaving the state.

The flip side: It has been reported that Duke — their coach is retiring you may have heard — requested placement in the Chicago regional. So you know whom could play in front of his homies.

The Blue Devils shall be meeting the Red Raiders in San Fran.

I sure wish Ian Eagle and Jim Spanarkel were the top announcing crew for the Dance. In my mind, they’re clearly the best.

Here’s what fascinates me about the coaching carousel.

The schools that went for the up and comers.

As I’ve opined, the next Denny, the next Coach K, the next Roy Williams are all out there. But who knows which of the younger generation they are?

The Baylor assistant is at Kansas State. The San Francisco guy is at Florida. The fellow from Chattanooga is at South Carolina. The long heralded coach at Cleveland State has landed at Missouri.

And his brother? His brother, who is facing a Bruce Pearl/ Kelvin Sampson order of mandatory time out, returns to Xavier.

Really. Whatever are the Musketeer muckety mucks thinking?

We are going to apply for hoops admission to the SEC.

Speaking of that guy at Houston.

The Cougars, in my mind, were the most impressive team in the Round of 32. Arizona be in a battle this weekend.

How about Jim Larranaga’s Miami Hurricanes. They whomped Auburn upaside o’ the head. Over and over again.

And Jamie Dixon got those Horned Frog of his humming the last couple of weeks. Wonder what those folks up in Pittsburgh are feeling about that?

For the first time ever, the NI1T semis and title game won’t be in Madison Square Garden next year.

Vegas, Hinkle are being mentioned.

I’m not going to do anything about this other than to say, the officiating was very odd last weekend.

Roughhousing was in style.

I kept expecting to see Bill Laimbeer and Rick Mahorn suited up for one team or another.

2 thoughts on “Hoopaholic Gazette: The Daze Between”