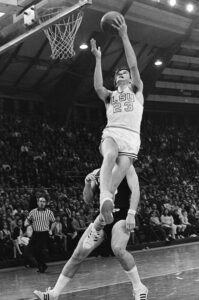 Which is to say, and it’s only partially wishful thinking with a lot of expectation, HVL will be kicking it up a notch or four next campaign. Given her legendary drive and work ethic, I wouldn’t be surprised if she passed on spring break at the beach to break down film, work on her game.

U of L fans do not especially cotton to Armando Bacot. That arm bar to Syd Curry’s neck, don’t you know.

Credit where it’s due.

Bacot had six double doubles in North Carolina’s six tourney tilts. Which is unprecedented. As in, it’s never been done before.

Plus in the title game, he was competing on one wheel. With a flat and out of camber, he still went 15 and 15. And who knows what mighta coulda happened, if the axel didn’t break and he needed to sit with seconds to play?

Love him or the opposite, the guy plays rough and tumble until the zebras tell him no no. And even then.

Carolina’s run as an #8 has been talked about plenty enough. Ws over Marquette, #1 Baylor, #4 UCLA, and #2 Duke are worthy of praise. Coming on top of beating Coach Whatsisname in the latter’s final battle at home. Im. Press. Ive.

What people are prone to forgetting is that the general belief remains the Tar Heels weren’t off the bubble until that smackdown in Cameron Indoor. Or that Hubert Davis’s surging squad lost to woeful Pitt in mid February. By 9. In the Dean Dome.

Twas a turnaround to be admired.

Watching the intensity and back and forth of the Duke/ Carolina semi, after the Jayhawks handled Nova in the opener, reminded me as a U of L fan of a somewhat similar situation in the ’86 FF.

#2 seed U of L played the first semi, which I’ve always loved. Forget that headliner game crap. Handling comfortably, if not with dispatch, overachieving #11 seed LSU, 88-77. The Tigers had beaten UK in the Regional Final. Thank you very much.

#1 Kansas faced #1 Duke in the headliner. It was as exhausting and fierce a battle as the second semi Saturday.

Looking forward to U of L’s next title.

5 thoughts on “Hoopaholic’s Final Fours E1: On the Court”