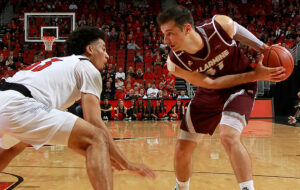 The reference, of course, was to the decades when UK wouldn’t schedule a game with U of L. Only happened after the Dream Game.

As bemused as I was at Davenport’s knee jerk anger, he’s got a point.

This Card diehard’s opinion: They should play. Annually. Alternating between the Yum! and Freedom Hall.

Other than “exhibitions,” the Knights have faced the Cardinals a dozen times, first in ’60, last in ’06, all Louisville Ws. U of L opened Knights Hall. I was there.

Now that the school is DI in the ASUN, all the more reason. City rivalries are cool. So what if Bellarmine wins. Good for them.

Which begs the question, will they resume the series after this two and off volleyball venue tradeoff is over? Is Scotty’s absolute certainty written in stone?

I don’t think so.

Have no idea what Kenny Payne’s thoughts are.

Nor, really, those of Josh Heird. But I do know this about Louisville’s new AD. He was at Villanova. Where, despite the transcendence of Jay Wright’s teams, they continued to play the other Big 5 schools in Philly. A tradition going back decades. Maybe not in doubleheaders at the Palestra, but they played.

So, here’s hoping an annual series comes about. Every other year at Freedom Hall also sounds like serious fun. I mean, it’s not like U of L doesn’t have a history of sorts in the building.

I remain obsessed with The Letter.

The one from “forty” prominent business people in the community, who were adamant in their position that Tom Jurich needed to be rehired as AD, that no other choice was worth considering.

I’ve spoken with several, who if not one of the actual “forty” were included in periodic email updates of the committee’s actions.

Beyond their palpable disappointment, both at the selection and the process, I was struck by this. Their passive insinuation that the letter might not have been written on behalf of the committee and the three signees, Jim Patterson, Lonnie Ali and Dr. Mark Lynn.

None saw it in advance of it being sent.

Hey, I’d disown it too were something that embarrassing written on my behalf.

None of them really responded when I inquired why the three signees wouldn’t have either repudiated it, or apologized for it.

It all remains fascinating to me.

As for the either do it our way or we’re done with the school implication in the missive, there’s this. Patterson is said to have been the key and major contributor to the upgrade to the baseball stadium which bears his name. Ali was present at the school’s meet and great with hoops season ticket holders Monday night.

Dr. Mark Lynn, come back to where you once belonged.

Like many Cardinal hoops fanatics, I’m checking daily to see if CKP and staff have closed the deal on another guard, or two, for the upcoming season.

A check with one listing of the top 100 transfer portal players indicates only two guards remain uncommitted. The kid from Texas, and a 2 from somewhere or another, whose name is at bottom of list.

My pal Doc has talked me off the ledge.

A bit anyway. One leg’s inside, the other still lingering above the street below.

He pointed out that last year Houston, after the injuries there, really didn’t have a point guard. But made do with length and super intense D.

For one, Kelvin Sampson, whatever we might think of him, is a really good basketball coach. And, while Kenny Payne hasn’t made a false move yet, we have no idea whether he’s got what it takes to sit in the Director’s Chair.

Before I get outtahere, need I say his name?