At the 11:54 media timeout of the opening half, the Louisville Cardinals had not scored for 5:45, missed their last eight field goal attempts, had given up an 0-5 run to Kentucky, and were behind 6-9.

But something eerily telling about the game’s outcome had already become evident.

The Wildcats had committed 6 fouls. Louisville would be in the bonus the rest of the half.

Because I am a diehard Cardinal fan as well as a conscientious reporter of the action, along with copious game notes on a legal pad, I also jot down in all caps along the margin, admonitions and exhortations.

Here’s what I wrote at the early juncture of the rivalry tussle: “MAKE FTS WIN GAME.”

In my mind, I was invoking a personal spirit force I call the Two Arts. That would be Arthur Kaplan, my father who introduced me to Cardinal hoops, and with whom I sat at games for the last 11 years of his life. And Art Zubrod, who had the seats right behind us in Freedom Hall.

They were obsessive about the importance of accepting the charity of freebies.

“Make the first one” still rings in my ears whenever a Cardinal steps to the stripe.

Though it is a somewhat simplistic breakdown of how UK’s 78-70 win evolved — there were obviously other factors including the Wildcats tougher play and execution during critical moments — had U of L made its free throws, it would have won the game. END_OF_DOCUMENT_TOKEN_TO_BE_REPLACED 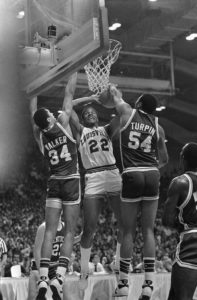 Saturday’s tilt in Rupp will be the 18th in the series. Of the previous 17, U of L has conquered the Wildcats only 4 times. Against 13 Ls. Uh, not so good. END_OF_DOCUMENT_TOKEN_TO_BE_REPLACED

Oy, what’s a sports dude to do?

Too many games. On the gridiron. On the hardwood.

Not enough screens. Too many clickers.

It’s the best of times. It’s the most frustrating of times. A Travail of Two Sports.

So, yeah, like last Saturday when the reality is I’ve been sucked into Joey the Vig’s Bowl Pool — at the risk of significant personal financial diminution — which requires I am compelled to cheer on the otherwise out of mind Blazers of UAB +17 1/2 in the New Orleans Bowl.

See what I mean?

On the other hand, the day dawned with several enticing hoops encounters. Rock Chalk Jauyhawk vs. Nova. Dayton vs. Colorado. And, you know, UK vs. THE O*H*I*O State Buckeyes.

You know that early 90s comedy “Death Becomes Her,” where Meryl Streep’s head swivels 360? Welcome to my world.

Yes I’m here to try to make some sense of what’s going on in my favorite sports. OK, at least to opinionate about what’s happenin’. END_OF_DOCUMENT_TOKEN_TO_BE_REPLACED

Miami O. is a Quadrant 5-quality squad, which had dropped 4 of 5 coming in against U of L.

But, in holiday mode too early, Louisville which played the whole opening half fully somnambulant, really sleepwalked into  halftime with four turnovers in the last five minutes, shooting ofer 4 during a 3:22 drought before the buzzer.

At the break, I got a text from an out of town buddy, an astute observer of the game, but he hasn’t seen all the Cardinals’ games. It read, “I don’t get this Louisville team. What’s their strength?”

Given my belief that the team’s true identity/ legitimate potential are still to be revealed, I typed off an evasively apologetic reply, masking my own worries.

After all, the Cards were only up 28-20, against the visitors who missed 18 of 20 treys and were shooting only 25% overall. U of L had surrendered six offensive rebounds, and missed 3 of 5 FTs.

Following cocktail time came another patent pending uninspired open to the 2d. U of L allowed the short, mediocre Redhawks to quickly pull within four at 31-27.

The bad shot selection, porous D and turnovers continued. Emboldened and playing with more energy, Miami hung around, again pulling within four at 44-40 on a Josh Brewer three at 9:02.

“And now, ladies and gents, last but not the least, come on down to a standing O, this week’s absolutely, positively, on the rise, numero uno #1 team in the land . . . the Buckeyes of Ohi . . . uh, nevermind”

At least Ohio State had the common decency to lose before rising to the “heralded” top spot in the polls. And it was to L’il Ricky’s Golden Gophers, who had a losing record coming in. Geesh.

Are we destined for hot potato 63 games in the NCAA? You take it. No, I don’t want it, you take it. A title game to supplant UConn 53, Butler 41 as the Worst Meaningful Game Ever Contested?

Despite their Sunday night defeat in Minneapolis, the Buckeyes are atop Ken Pomeroy’s computerized hierarchy, with the 8th rated offense, and fourth rated defense. Followed by the Blue Devils, the Cardinals, the Jayhawks and Sparty.

Strap in, fellow hoopaholics, before a champ’s crowned this campaign is gonna make a ride on King’s Island’s Orion feel like the Merry Go Round at KiddieLand.

So, even though there were a couple of tilts of interest on Saturday afternoon, it was if not de jure a de facto Hobson’s Choice. END_OF_DOCUMENT_TOKEN_TO_BE_REPLACED

The University of Louisville has been competing on the hardwood against Eastern Kentucky since 1919, when Saturday’s visitors were a Teacher’s College. (Or, so I recall.)

The Cardinals and Colonels — Didn’t they used to also be called the Maroons too? — have now battled 72 times on the hardwood.

At one time,  it was a competitive instate rivalry. But obviously has not been so since the last EKU win in 1963. The series now stands 50-22 favor of U of L.

Saturday afternoon’s tilt played out as the last 15 have: Cards  99, Colonels 67.

Which is not to say that, for many reasons, it wasn’t a reasonable test for Louisville, after last Tuesday’s debacle in Madison Square Garden. It was.

Given the Cards less than satisfactory point guard play, Chris Mack indicated in advance he intended to give freshman David Johnson more PT at the point. END_OF_DOCUMENT_TOKEN_TO_BE_REPLACED

Well, I stand up next to a mountain/
And I chop it down with the edge of my hand

OK, so much for that top of the rankings thing.

Other than a quick fix of fleeting prestige, there’s not a lot of good that really comes from being #1 in early December.

Obviously it would have been preferable for the Louisville Cardinals and their fans that the fall off the top of the mountain had been softer and less precipitous than a 57-70 beatdown to Texas Tech.

To a Red Raider team that arrived at Madison Square Garden for the Jimmy V Classic, carrying the baggage of a three game losing skein. Playing without their injured, best player, their leading scorer.

But, one guy’s opinion, it’s a good thing the Cards don’t have to worry about sitting at that top spot for now.

Hopefully, U of L will learn from this most instructive loss.

Chris Mack certainly hopes so: “Hopefully, our guys take this as a lesson learned.” END_OF_DOCUMENT_TOKEN_TO_BE_REPLACED

In the world of sports, most but certainly not all of those shivers-down-the-spin feel good stories come crashing down like a six year old about 8:30 or 9:00 o’clock Halloween night.

And so it has come to the point where I must offer my condolences to Glorious Editor at Card Chronicle.

His second most beloved team — That would be the DePaul in case you hadn’t noticed — was cruising along through the first month of the campaign.

Unblemished, actually. With victories over Iowa, Minnesota and Boston College among the Fairleigh Dickinsons on the schedule. (Actually BC and the Golden Gophers have fallen to a bunch of folks, who, for some reason, wear the victory like a badge. But that’s another story for another time.) DePaul even bested Texas Tech, another not quite as good as expected outfit, after we entered the Month of Festivus.

So, the Blue Demons kind of became a, well, Thing. Pundits wondered whether their sudden, unexpected onslaught of “competence,” meant they’d become The Nation’s Sweetie Pie. (Glorious Editor, heady with the thrill of victories, was heard to utter, “Jump on board the bandwagon, plenty of seats available in First Class.”)

So, at 9-0, up 24 spots in Ken Pomeroy’s rankings, and looking for its double digit W on Sunday, DePaul met a recent mid-major fave, Buffalo. At home in the Hog Butcher of the World. And held the Bulls at bay for most of the first half, which was as sloppy as my previous look see at the Blue Demons was. 24 turnovers between the two . . . at the break.

But as the clock wound down toward intermission, first-year coach Jim Whitesell’s charges fashioned a 13-2 run to take a 37-30 lead over the home team.

The teams cut down on the gaffes in the 2d, committing only 13 between them. But #105 Buffalo kept the Blue Demons measured and prevailed by five.

The nation’s erstwhile darling has now returned to where it once belonged, memehood.

The world of college hoops is no longer out of kilter. END_OF_DOCUMENT_TOKEN_TO_BE_REPLACED

A Happy Valentine’s Day came early for the Louisville Cardinals.

I could claim innocence, being possessed, say the devil made me do it. But nah. I had to go there. If you’re a hoopaholic, it was a sweet moment.

With about 9:00 or so to play, Louisville’s 14 point halftime lead had been whittled to 47-42. Pitt was trying to get in touch with its inner Stephen F. Austin. It was hoping to draw Purple Aces. And doing a dang fine job.

Louisville’s game had turned grayer than its first time unis.

Pitt’s Au’Diese Toney was whistled for fouling Jordan Nwora near the midcourt stripe. The caller of the transgression was one Ted Valentine, who, frankly, hadn’t felt the need to be front and center of the action to that point in the tussle, which is his usual M O.

Most Especially Director of Basketball Operations Brian Regan, who verbalized thusly to Valentine. (Dirty Word Advisory. Please send all those under 18 and over 80 to the other room.) END_OF_DOCUMENT_TOKEN_TO_BE_REPLACED

With stultifying defense, and led by the all factors of the game, All-American, 22 point/ 12 rebound dominance of Jordan Nwora, the now legitimately ranked #1 Louisville Cardinals dispatched the nation’s best-resuméd Michigan Wolverines Tuesday night.

Chris Mack instructed his Cardinals to build a wall.

And build a wall they did.

Playing the paradigm of tenacious D, the best the Cards have been at that end of the court since they vanquished the Wolverines for the ’13 NCAA title, U of L never trailed for a nanosecond and prevailed by the UVa-ish score of 58-43.

More on that D in a bit.

Since he played The Game of His Career, praise for Jordan Nwora’s performance must come now, right behind the lede. END_OF_DOCUMENT_TOKEN_TO_BE_REPLACED