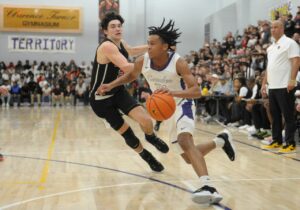 OK, I’ll hold off on my usual self referential hoo ha and cut to the chase.

DJ Wagner and his New Jersey Scholars mates opened their stay at the Louisville session of the EYBL Saturday morning with a 73-71 W over ProSkills.

Bottom Line: Yes, Milt’s grandson is a baller you would like to have playing for your favorite school.

Even my less than astute eye can tell that.

In spite of his his superprep top of his class or close to that status, he doesn’t preen. He doesn’t posture. He doesn’t complain to the refs.

He plays the game. He stays focused.

He handled the rock 4, 5, 6 times before ever taking a shot. He sees the court. He finds his teammates. His passing is deft.

Like elite players do, he accelerates effectively when taking the ball to the rim. Especially on straight line drives, when he was relatively unimpeded thanks to sets being run by his squad. END_OF_DOCUMENT_TOKEN_TO_BE_REPLACED