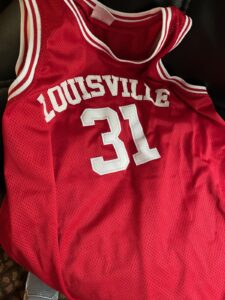 Yeah, that’s what I’m talkin’ about.

If you don’t know which former Cardinal it references, you be in the wrong place. Just sayin’.

If you do, eat your heart out.

I throw it up there, because all signs are pointing to the Cardinal men’s hoops returning to where it once belonged.

It’s going to take awhile. So, be patient.

My man who is periodically at practice reported in last evening.

FYI, he shall henceforth be known as Gym Eyes. Here anyway. Not sure his bride will find it as cute as I do.

Unfortunately, I was sitting in my car outside the grocery when he rang me up. So I didn’t have paper and pencil in hand to take notes. My memory on the wane, I’ll only be able to talk in generalities.

The big takeaway is that everybody on every drill looked markedly if incrementally improved over GE’s last look see a couple of weeks ago.

The coaching staff is emphasizing conditioning. Drills will be blown dead if players are not going full speed. As happened at least once when Josh Jamieson blew a stop the proceedings of the guys he was working with. I’m advised the team was broken into two groups on Tuesday, the bigs and the perimeters. END_OF_DOCUMENT_TOKEN_TO_BE_REPLACED

The future Justice only mentioned it about 173 times during his confirmation hearing.

During which dog and pony show we also learned that he and his pals — Squee, Moose, and PJ — also like college hoops. Kinda anyway.

He made a note on his calendar in March 1982 about the U of L/ Georgetown battle in the Final Four.

“Who won that game anyway?”

Yeah, beer and basketball. It’s a match for many.

Maybe his honor doesn’t remember much about that particular tilt, but it’s obvious from his concurring opinion in “NCAA vs. Alston,” that he’s been paying attention to the grift college sports’ ruling body has been running for a long while.

More about his take in a second. END_OF_DOCUMENT_TOKEN_TO_BE_REPLACED