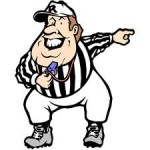 Brent Musburger was frothing at the mouth with hyperbolic perspective, after a late play in Okie Stat’s dismemberment of the previously undefeated Baylor Bears.

“That’s the whole game in microcosm right there,” he observed. (That’s a paraphrase.) The utterance came after a major gaffe that deep sixed any hopes the visitors would leave Stillwater with a W. QB Bryce Petty wasn’t able to fall on an awful snap from center gone awry, fumbled it, and watched as a Cowboy with his whole posse by his side galloped 78 yards for an exclamation point TD.

The Bears, at one point down 3-35, were driving like a sooner deep into Oklahoma State territory — a real homesteading sooner from the olden days — looking like the deficit would soon be an overcomeable 17 points. Instead it was 10-42.

So, yeah, Brent it was a big play.

But, I’m a believer in harbingers. And a couple came early.

First, Baylor won the toss and, confident in its O, took the ball. They were forced to punt.

Then, on its second drive, the Bears drove the field. Petty kept the ball after a fake handoff, and had dead aim on the goal line with no Cowboy close enough to stop him. But he stumbled and was downed at the one. Two plays later, the home team recovered a fumble. Baylor came away empty.

Ballgame, I confidently said to myself, knowing Baylor had never won a road W against a ranked team — ever — and that I’d picked the black and orange-clad Cowboys to win middle of last week in my Peerless Pigskin Prognostications. (Yes, okay, I had to flip a coin, but it was the result I was hoping for.)

Just a few days ago, the Florida AD said he was 1000% behind Will Muschamp.

The Gator coach has now vaulted to the very tip top of the Dead Man Walking standings. (Not very far behind is Brady Hoke, but that’s another tragic tale for another time.)

Since that show of support, Florida has gone down twice. Yesterday to Georgia Southern. In Gainesville. The visitors completed 0 passes. As in none at all. And GaSou only attempted three, so it’s not like Florida’s D was confused by play action.

Since Georgia Southern is located in Statesboro, it means that Muschamp has the “Statesboro Blues,” which means that I, an inveterate fan of the Allman Brothers Band, my favorite band of all time, have an excuse to insert this smokin’ hot video into this blog post.

At this juncture, given the news presented immediately above, Louisville Cardinal fans at home and in the diaspora are fretting that Charlie Strong will soon be announced as head coach in Gainesville.

I think Charlie Strong is an incredible human being, a truly great role model and disciplinarian in a profession where those designations have a hollow ring to them. I also think he’d have to give a move back to Florida serious consideration, despite his professed love for The Strategic City of the 70s. Because going to Tennessee is one thing, properly dismissed. Going to Florida where DI stars are more bountiful than oranges, alligators, empty high rise condo buildings, lines at Joe’s Stone Crab and bling on South Beach . . . combined.

My guess is he won’t be offered the job. Because, as much I/ we love Strong, let’s be fair in our assessment. He’s still not proven he’s as good a coach as his pay grade would indicate. He may very well be. But, he just hasn’t done it yet.

Rarely do games as hyped as last night’s NFL battle between the Denver Mannings and the New England Brady Belichicks live up to the anticipation.

I also watched part of Grey Cup from north of the border, eh.

The Saskatchewan Roughriders bested Hamilton’s Tiger Cats. Though I prefer the shortened nickname, TiCats. It’s a wacky game they play up there. Bigger field. Lots of guys in motion. Fun.

Bama and the Seminoles are on a collision course for the BCS title thing.

It should be a good game. Unless, of course, Famous Jameis’s legal troubles sideline him. Or, the Tide loses this weekend at Auburn. Or, Florida rises from the ashes to surprise Florida State.

Wisconsin’s got the best team nobody is talking about. But Badger fans’ dreams of a Rose Bowl berth are truly just that, dreams.

And, finally, sigh, a mention of my Oregon Ducks, who were shot, bagged, dressed and shipped to a Chinese restaurant near you by Arizona.