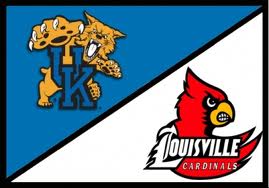 I don’t have to look at my watch to know it’s less than 24 hours to tip off.

I’ve just left Rick Pitino’s pre-rivalry press conference, and somebody without a clue might assume from his laudatory comments about UK and his coaching adversary that RP and JC were best buddies.

Calipari was just as disingenuous during his presser. When asked about different ways of building a team, to compare his MO with Pitnio’s, he didn’t take the bait.

They are not best buddies. Far from it. They, well, you know, really dislike each other.

But, as competitive as they are, neither is incautious. Thus, no pin board material as the game gets close.

I’ve tried to digest as much as possible from the extensive cheat sheets provided by U of L SID Kenny Klein and his UK counterpart, John Hayden, I believe.

Kentucky ranks 1st nationally in rebounds per game at 48.2, and is 5th in rebounding margin ( +12.8).  The Cats rank #1 in offensive rebound % at 45.8%. Which, I assume, means they grab almost half of every shot they miss. Which, frankly, should be a very scary stat for Cardinal fans.

Other evidence that UK is tough underneath are the 7.4 blocked shots per game it’s averaging. That ranks 6th nationally.

At the other end of the scale is Kentucky’s performance from, as color commentator Mike Pratt calls it, Treyville. UK averages 5 threes a game, which is 269th in the country. And is hitting only 31.7%, which is 230th in the country. Which is their exact same ranking for FT shooting (67.5%).

Louisville’s strengths are elsewhere. The Cards lead the land in turnover margin (+9.4) and scoring margin (+26.2). The Cards rank 4th in fewest turnovers per game at 9.2, and 7th in assist to turnover ratio at 1.68. They steal the ball 9.8 times a game, which ranks 11th.

One sense I do have about this game, as with most heated rivalries where rambunctiousness often means a lot of fouls, is that FT shooting could very well determine the outcome.

The Wildcats are hitting only 67.5% as a team, but the damage comes when Willie Cauley-Stein is at the line.1 He’s only hit 18 of the 37 he’s attempted.

Other regulars,  Randle and the Twins, are all above 70%, while Young is just under at 69%.

Louisville has made only 65.5% of its FTs. But it’s a truly skewed stat.

The flip side comes at PF. Harrell and Behanan lead the team in FT attempts at 47 apiece. Silent L has hit only 53% of his, Chane, an even worse 45%. Mango also resides in make one, miss one territory at 54%.

There are more than a few folks who opine the game will be won or lost at the 3 spot, the theory being UK’s advantage underneath is matched by U of L’s in the backcourt.

UK’s sharpshooter James Young is averaging 13.4 ppg, but only draining a third of his threes. Wayne Blackshear is scoring but a bit over 10 ppg, but has made 24 of his 53 long balls (45.3%).

The latter has won a national championship, in which he was a significant if underrated factor. The former has not. The latter’s sub was Final Four MOP.2

Neither team has won a significant game yet this season.

What does it all mean?

It means that, on paper, it’s gonna be close.

Which is why the line opened at Pick ‘Em in Vegas.

But, as best I recall, the game is played on hardwood, not paper. Which is why your guess is as good as mine who will win?

I will go out on one limb. I don’t think either team is going to come anywhere near scoring 80, let alone north of it. Unless, that is, somebody goes Rex Chapman, as happened in December ’86, when the Cats clocked the Cards in Freedom Hall by thirty four, 85-51.

Something like that would be the only possible upset, so closely matched are these rivals this season.

I do know one thing for sure. Sphincters shall be tight in the stands, and in front of TV sets all across the Commonwealth.

1 thought on “Breakin’ It Down: Louisville vs. Kentucky”