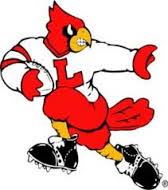 Saturday is gonna be one intense day for Louisville Cardinal fans.

There’s that late afternoon hoops contest against arch rival, about which I’ve opined a couple of times, and surely will again before tip off.

I don’t know much about Miami.

The Hurricanes started the season with 7 straight Ws, including victories over Florida and Georgia Tech. They had a woeful November, losing three straight to the Seminoles, Viriginia Tech and ACC surprise of the year, Duke. Then finished with Ws over Virginia and Pitt.

Not much about Miami’s national statistical rankings jumps out at me. Nothing great. Nothing awful. Though the Canes do give up 26 ppg, which ranks 59th in the land.

Apparently U of L will be without steady if not spectacular LB George Durant, though the situation hasn’t been addressed by the school as of this writing.

The nation’s betting public has consistently considered the Cards a FG  or FG+ favorite, since wagering opened.

All of which info is pretty boilerplate stuff. So, you might be wondering what I think will happen?

Well, thanks for asking. Admittedly there are going to be very few salient insights here.

Louisville has looked good at times this season against a truly mediocre schedule. More often the Cards have played flat. They lost to the only really decent team they played blowing a three TD lead, then another lead late. If these Cardinals have a solid stem to stern great game in them, it’s time to put it on display.

Which U of L did last year in the Sugar Bowl.

Miami’s season has been solid if uninspiring against significantly better opponents.

My sense is the game is going to be chippy early. A majority of the teams’ players are familiar with each other. The Hurricanes have 50+ players from the state of Florida; U of L more than thirty. A lot of these guys played with each other, or against each other. They live around the corner from each other.

Testosterone levels will be high at kickoff.

I think whichever team moves beyond that the soonest, calms down and just plays its game, is the team that will win.

I haven’t the slightest idea which one that will be.