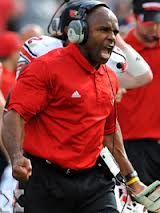 There are times when the internet does know things before the rest of us.

Charlie Strong’s hometown is Batesville, Arkansas, a blink by the side of the road in the northeastern part of the state, just short of a hundred miles from Little Rock. In hopes of gaining some previously undiscovered perspective on Strong, whose job change has been the flashpoint for emotions in this town this weekend, I checked out Batesville’s Wikipedia page last evening.

Strong is listed among the town’s favorite sons, one of its “Notable People.”

Strong was already listed as head coach of the University of Texas football team.

I’m not sure the scant info on Batesville provided much insight on Strong, or the how and why he made the decision to take the Texas job?1

But I do know that when Strong was a kid in that town, a minority in a place where and when minorities were required to know their place, the state’s university competed in the Southwest Conference, a league in which the University of Texas was top dog, everybody’s rival.

From that slim composition of information, I feel compelled to surmise that coaching in Austin might have been one of Strong’s long term aspirations, once he became a coach.

And Surmises are about all I — or any of the local media — have to hang our hat on when considering Strong’s thoughts. He is an intensely private man.

I had less than a minute with him one on one, during the Media Day press conference before his first season.2

I’m bummed that he’s leaving, but not pissed. Really, it’s the University of Texas, for heavens’ sake. This is sad, unfortunate, but understandable, acceptable behavior.

Unlike that of Howard Schnellenberger, when he petulantly jumped ship to Oklahoma after years of telling local fans that we were all in this together, and that he was the home boy come back to lead us to the promised land. Strong, with no local ties before coming to town, made no such proclamations.

Tom Jurich, who I thought was spot on during his press conference today, wishes Strong well. So do I.

Now we’re on pins and needles while Jurich, a guy with a seriously righteous record picking coaches, hopefully works his “magic” again.3

There is one opinion that has been a constant among all Cardinal football fans with whom I’ve communicated. They/ we would take Bobby Petrino back in a nanosecond.

When Petrino was mentioned by a scribe during Jurich’s presser today, his response: “Everybody is in play.”