There is, of course, much to be said of Not So Silent L’s best game ever as a Cardinal. And I shall in due course.

USBWA requirements mandate I talk about that whole ejection thing, and the play that precipitated it. So surely I will.

But first, a breakdown of the most important four minutes and 29 seconds of U of L’s season so far.

U of L led by 6 at the half. A lead which the Huskies swallowed in a rush at the start of the 2d, on 3 FTs and a Shabazz Napier trey. Immediately after which @ 18:31, The Rick called one of those patented knee jerk timeouts of his.

Coming out of the timeout, Luke Hancock drained a three. 37-34. Boom!

In a Gampel Arena more raucous than Jay and Dickie had ever seen it, in a truly important league game for both teams, the Cardinals displayed their steel for the first time this season.

They grabbed the game by the short and curlies. More important, they never let go.

One of the ways a team can display its mettle is by scoring on set plays after stoppages in play.

That Luke threeball after UConn tied it up early after intermission was far from the first time U of L showed its growing maturity last evening.

Up 19-13 coming out of the first half’s second media break, Van Treese got it to Luke on a back cut to up the lead by a well executed deuce.

Out of the next break, Harrell found himself open at the elbow, and drained a 17 foot jumper, to up the score to 25-20.

Returning to the court after the final media break of the opening stanza, Russ Smith found SVT for an easy layin. 29-22. 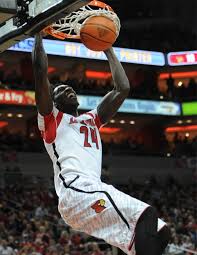 Last night was the first time I felt that Montrezl Harrell said to himself, “This game is mine.”

He was a beast from the beginning.

At that media break at 7:23 of the first half, Not So Silent L had 11 points and 5 boards. Then he hit that jumper discussed above.

His halftime stat line was a thing of beauty. Seven of 8 from the field, and a FT for 15 points. Six rebounds, three offensive. Three blocked shots against the school that owned that stat for years.

Harrell’s final numbers. 18 points. 13 rebounds. Add a steal and an assist to his totals.

Plus he was on the court for all but a minute of action, never got winded and never faltered.

A performance worthy of more than one curtain call.

In his first road game of consequence, running the show, Terry Rozier’s showing was also significant despite 1/7 shooting.

Seven rebounds to go with 5 points. A couple of steals.

Most important, only one wafer thin turnover in 33 minutes of action, in, to quote myself, “a Gampel Arena more raucous than Jay and Dickie had ever seen it.”

Here’s what I think I love most about Luke Hancock. I love when he has the ball in his hands at the end of crucial game like this. 99.9% of the time, he’s going to make the correct decision. His is a steady presence when there’s nervousness in the air.

Frankly his numbers last night, nice as they be, are of no matter. He was a rock.

Louisville was +15 on the boards.

That, mes freres, is a whole lotta Windex.

Here’s the word I use to describe last night’s performance: Mature.

The Rick defensive game plan — a match up zone — was a risk. Especially after the Huskies shredded it for six treys on 14 tries before intermission. But, they were only 2/9 after.

A conference W on the road after the Ides of January against a legit contender = Huge.

I know you know that.

Given the bang bang play and lack of a call that precipitated the outburst, his consternation was understandable. Giffey did sort of, kind of, hip check Blackshear as he was going up for the shot, and was indeed bumped when Wayne descended.

Then again, this was, after all, Big East basketball.1

Ollie showed his passion. As well as his relative immaturity as a coach. My guess, given his talent as a hoop mentor, and as his learning curve progresses, it won’t happen again.

Though his team was down 9 at the time, the event did seal the Huskies’ demise. The deficit grew to 38-54, before the shell shocked home team steadied up.

It was a bad no call. But, hey, zebras happen. A coach has got to keep his hand on the throttle.

That’s what life needs to be like in Olliewood.

As magnificent as the W was, arguably my favorite moment of the night came during the Game Day Show that preceded it.

They cut to Dickie V for his thoughts. His microphone wasn’t working. Vitale was motormouthing, but there was blissful silence coming from the speakers.

With a seriously bemused smile, Reece Davis deadpanned, “This is a lot of people’s dream. Dick Vitale’s mic isn’t working.”

When the camera cut back to Vitale, he had the look of a fellow whose puppie had just run off.

Speaking of that hyped up, big game crowd in Gampel, I still can’t get over how lame it was in the Yum! on the night of the Memphis State game.

But, hey, I won’t obsess. The Cards won last night at UConn.