Seems to me the Big Ten is just about cornering the market on interesting stories this season.

Not the least of which are how Richard, Son of Rick, is going to fare in his rookie season and the future at the helm of the Gooooolden Gooooophers of Minnessssssota? And how Chris, Son of Doug, is going to fare during that same time frame in Evanston at Northwestern, the only big conference school never to have Danced post-season?

So far, well, it’s looking promising for both institutions. This is their inaugural years after all, so the bar is low.

They play this Saturday in Minneapolis.

Collins has a longer, deeper and drier row to hoe. The Wildcats are 11-11, but have notched 4 Ws so far in 9 league games. The topper was last night’s stunner against reeling Wisconsin in Madison.1

The team in purple tried to give it away at the end, but were so far ahead that Wisconsin couldn’t catch up, even with Northwestern repeatedly throwing the ball to Badgers on inbounds plays as time wound down.

I’m fascinated with Collins for several reasons. One, he’s the son of a very good coach. Two, he seemed to be doing an inordinate amount of the bench coaching last season, his last as Mike Krzyzewski’s first assistant at Duke.

Unless Northwestern somehow steals the ring at the Big Ten tourney, the currently .500 squad won’t dance this year. But it won’t be long until the drought ends.

The Gophers are 15-6 (4-4) and appear headed to the NCAAs, absent a Badger/Buckeye kind of meltdown.

The Cardinal Nation is in a bit of a tizzy this morning. None of The Rick’s recruits made the Golden Arches A-A squad.

Not Shaquan Aaron, the leader of a Top 5 squad. Not waffling Quentin Snider.

Does it matter? History says so.

The only team to win the NCAA without a McD A-A in contemporary times was Maryland. You gotta have at least one. Or, so it would appear. The only one left on the U of L squad now is Wayne Blackshear.

Meanwhile, the rich get richer, etc, etc. Duke and UK have four each on the squads. North Carolina, three.3 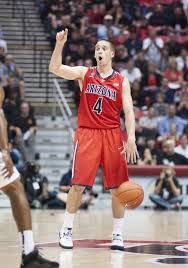 Didn’t watch much of the Orange, because I had to really paid attention to Arizona and check them out.

The Wildcats are legit. Winning in Palo Alto this late in January — like winning in Winston-Salem — is the equivalent of acing the mid-term in “History 431: The Philosophical Ramifications of the Defenestration of Prague.”

My suggestion for both squads:4 Don’t go into the NCAA with an unblemished record. The last thing you want is more pressure.

Anyhow, I don’t perceive an aura of inevitability about Arizona, but I like the way they play. Formidable.

That PG transfer from Duquesne T.J. McConnell is the deal.

If you’re looking for signs, the Wildcats previous national crown came the year after Rick Pitino won it at UK.

Not sure what the real dynamic is between play by play guy Dave Pasch and bloviating Bill Walton. But, Pasch sure did get in some subtle and not so subtle digs during last night’s telecast of ‘Zona at Stanford.

After one Walton hyperventilating, meandering digression, Pasch jumped back into play by play with this, “Now back to reality . . .”

When Walton asked how he did while majoring in communications at Syracuse as an undergrad, Pasch “joked,” “I’m stuck here sitting next to you . . .”

Florida’s Billy Donovan is now faced with a similar situation as his mentor.

The Rick has to figure how to work Chris Jones back in the rotation without upsetting the good chemistry that has developed in his absence.

Touted frosh Clay Walker has been cleared to play for the Gators. Florida has been a surprise in his absence, a legit contenda.

Will the addition in the middle of a rookie, hurt or help?

Louisville is a large 11 point favorite tonight over Cincy in a big league game.

Given that the team has had a week to prepare, I’ll be surprised if they don’t cover. Cincy’s a decent squad, but methinks its W over Memphis State in The Birthplace of Rock & Roll, is as anomalous as the Tigers’ surprising W at the Yum!.