Breaking News: Just discovered in that sinkhole in Bowling Green, along with those classic Corvettes, hidden in a container, the soul of Indiana University basketball.

Despite their dismay, many Hoosier fans are relieved, having wondered what happened to the soul of their beloved hoops program.

I didn’t watch IU’s game last night, until turning over after Tyler Ennis sank Pitt. The game in Bloomington was apparently just completed, since the teams were walking to their dressing rooms, the one in white with heads hung down. The 66-65 score was at the bottom of the screen.

What struck me was how eerily quiet the arena was. Way more subdued than one might expect, despite a loss to the dreg of the conference.

Then I checked the play by play and saw what happened.1

With 2:09 on the clock, the Crimson & Crean still had a nine point advantage.

Four Indiana turnovers, 2 missed shots and a total and absolute meltdown later, the Hoosiers traipsed out of the gym on the short end of a devastating L.

Yes, the Hoosiers lost a lot off of last year’s Top Ten but eventually underperforming squad. Yes, the are young.

Where have you gone Uwe Blab, a state turns its lonely eyes to you?

As a died in the wool sports fan, one of the things I love are major sporting events which I can watch immediately upon awaking in the morning.

The obvious example is Breakfast at Wimbledon.2

Tour de France is especially tasty with my coffee.

So this morning was a delight, getting to watch the U.S. of A. male hockey ensemble dismantle Slovakia, 7-1. Or, was it Slovenia, I always mix them up. No, Slovakia, I was right the first time. Russia beat Slovenia. 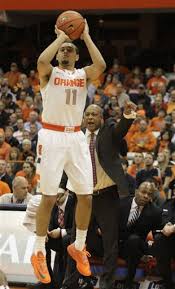 What a classic Big East battle between Syracuse and Pitt last night.

Intense. Hard fought. Down to the wire.

Some long time ACC acolytes must have been asking themselves, “What have we gotten ourselves into here with this expansion thing?”

The Panthers had never lost to a Top 5 opponent in this arena. Which is a testament to the mettle of Jim Boeheim’s current squad. The Orange hung around and hung around.

Then, when it mattered, star C.J. Fair hit a trey. Then a deuce. Then the nation’s most valuable freshman Tyler Ennis canned  the game winner from just inside the mid court stripe.

So, absent an unlikely and seriously improbable run to repeat by my Cardinals, I’m hoping for a final, matching undefeated Syracuse vs. undefeated Wichita State.

How cool would that be?

Long time Hall of Fame coach vs. Up and Comer.

You think there’d be some folks tuning in?

U of L’s game with Temple has been postponed until Friday night.

I wonder if it will even be contested then?

A foot of snow fell in Philly overnight, then came the sleet, with more white stuff expected this evening.

The Cardinals are in Philly, their flight having beaten the storm Wednesday evening.

So, one has to assume the powers that be will do their best to get the game in, so the Cards can return and prepare for a game on Sunday against Rutgers at the Yum!.