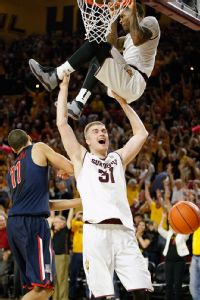 A couple of quickies this Monday morning.

We all know strange things happen at Cameron Indoor, which always seem to favor those Dookies. You know, kinda like they happen in South Bend to whomever the Irish are playing either on the hardwood or gridiron.

Duke survived Maryland over the weekend. By a deuce. The Ghost of Cameron Indoor knocked away two last minute Terp deuces that would have sent the game to overtime, had they dropped in instead of out.

Truth is, as now admitted by ACC, the game should have been tied at the moment. Earlier in the half, Duke was awarded a possession on a tie up, when the possession arrow should have pointing Maryland’s way. Duke scored on the illegal possession.

Wonder how that happened?

Hangin’ On The Rim.

Some U of L fans have been giving me grief for my mention on several occasions of Montrezl Harrell’s annoying propensity to hang on the rim after a dunk.

He’s only been teed up for it once this season. But could have been on any number of other occasions. And may be in the future.

Arizona State’s Jahii Carson punctuated the Sun Devils’ upset of cross-state rival ‘Zona with a slam in the last second. During which he hung on the rim with both hands.1

League officials now admit he should have been awarded a technical. Which, theoretically, if Arizona were to hit the FTs and score on the ensuing, very, very short possession, change the outcome.