There is no easy answer.

Unseld, it is easy to say, was the Elvis and Beatles of Louisville Cardinal basketball. His matriculation to the Belknap campus was a watershed moment. As I wrote recently, the ovation on his Senior Night was the most adoring ever.1 The crowd would have applauded til the break of day.

Yet, given the times — social media, the plethora of fan sites and fawning bloggers, TV exposure, etc — Smith is arguably even more revered than Unseld. Or, any other former Cardinal, the legend that is Darrell Griffith included.

Such was the magnificence of Smith’s offensive show last night2 — He was the paradigm of “in the zone” — I would have let him go for the record. It would have added another fitting capper to a stunning, unforeseen career of a guy that we all thought was one and gone to a school in the MAAC, or somewhere else after his forgettable, injury-plagued frosh season.3

But the single game record was not to be, as dictated by The Rick. I’m okay with that . . . I suppose. But it would have been really neat though.

There was another career moment last evening. 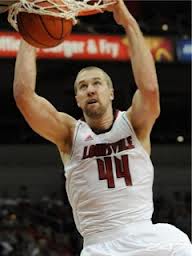 Stephan Van Treese visited Treyville for the first time ever as a Cardinal. On a designed play.

Louisville’s workhorse pivot was money from straight away beyond the arc with 2:38 on the clock, increasing U of L’s advantage to 28 at 92-64.

That was the glitz of SVT’s night. The grist was another double figure rebounding performance. Plus his 3 steals.

The Hoosier’s steady play has been as key a cog to the Cardinals’ recent uptick as anybody’s.

So, the night was won by the two guys who coulda been outtahere, had The Rick followed his initial instincts, and sent them packing.

I must admit to a bit of trepidation at halftime.

It seemed as though the Cards should have been much further ahead, as dominating as their performance had been.

Then, the Cougars tallied the last six points of the half to pull within 14.

I was worried. Pitino was pissed. He lacerated his team’s defensive effort — or lack thereof — in the quickie TV interview at the beginning of the break.

As with most Cardinal followers, I continue to wonder about Wayne Blackshear’s game, hoping for the breakthrough we hope to come.

He did play great D in the first half last night — and the second — especially covering the weak side. He had a key block early on.5

Louisville was an improved 76% at the FT line, thanks to Russ’s work, and the fact that of Luke and Wayne, who were 6/6.

I am advised by loyal reader Doc that the correct terminology for what the Cardinals have doing to recent foes — You know, winning by absurd margins in the upper 20s, 30s and 40s or more — is “levitched.”

The Cards are undefeated in games when fan fave, frosh walk on David Levitch makes it on the hardwood.

I know, I know, he plays only when the battle is won, but work with me here, we’re looking for idiosyncrasies to increase the magic factor as the Dance draws nigh. The Pig Latin communication/ Wiley Brown’s thumb in the dumpster kind of thingies.

That brings us to tonight’s tournament title tilt against UConn.

I was hoping, to be honest, for Cincy, despite Louisville’s decisive two Ws against the Huskies.

Shazazz and friends shall be ready for U of L after being embarrassed just a week ago in the regular season finale. Louisville is likely to take them way more lightly than it should.

I am impressed by what Kevin Ollie has done this week. His team has rebounded mightily after its beatdown in the Yum!. They crushed Memphis State Thursday night. UConn reeled in the Bearcats last night with a 17-2 run at crunch time. FTs were made. The game was won.

You think the Huskies want revenge? Well, yes, I already said that.

Besides, this is a good team, standing 26-7, with quality non-league Ws over Washington, Harvard and Billy Donovan’s Florida Gators. Do not be fooled by the 38 point L to Louisville last week. It was an anomaly.