Which is to avoid the obvious. There’s a Fed Ex employee here in town, who’s got Russ Smith’s 2013 tourney jersey hanging on his bedroom wall, like some stolen Renoir.

I doubt that Jonathon Blue’s $3 large is going to shake it out.

Yes, you and I know there’s something strange about this whole tale.

If the framed jersey was damaged, why couldn’t Big Russ just have sent photos of it and the damaged packaging to Fed Ex’s claims office?

As interesting as whether this jersey, which I simply can’t believe was simply tossed away inadvertently, is found, will be what type of PR gesture the Memphis-based Fed Ex makes to offset the bad pub?

There’s a guy who needs to stay on his prescribed meds — doctor ordered doses strictly applied — and off the street drugs. I’d also suggest he also stay away from Happy Hour at Soulshine Pizza too.

Being the curious sort, I wonder whether Sam’s kiss with his boyfriend after being drafted was preplanned? You know, as a statement of sorts. Or, was it truly just a spontaneous, joyous reaction, after sitting around his own personal green room for three days, hoping to hear his name called?

I sure wish him well, hope he makes the team, even turns out to be the Rodney Harrison of the draft, a guy with a fierce rep for decapitating hits.

I am somewhat bemused by the boasting by the Rams hierarchy, each self-congratulatory member of which is walking about in a cast, having broken an arm, patting himself on the back, after the team chose Sam with a throw away pick, when the only draftniks left in Radio City were cleaning folks with mops.

Donald Sterling is a loathsome individual.

The adverse pub is well deserved. And long overdue. He’s been a scumbag for years, and anybody paying any attention has known that.2 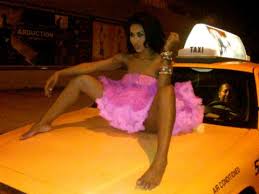 Yes, Donald, you should have paid off that V. gal with her first-name initial and visor that covers her exotic face. Yo, darlin’, we’ve seen your exotic mug. We know what you look like. We’ve seen the photo of you on the hood of the cab, getting ready, one would suppose, to do your Cameron Diaz imitation.3

And, while I’m passing along unsolicited personal advice to the feisty, litigious billionaire, I’d suggest to him that Magic Johnson’s not the guy you want to take on when it comes to the NBA. Johnson’s royalty, Donald, you should know that.

The whole situation presents a fascinating dynamic. In which, the players are using a collective power that can’t be ignored. The threat of a boycott is very real, should a Sterling of any gender, denomination or hue remain in an ownership position with the Clippers.

Frankly, it’s a good thing for the league, this pub, which one would normally consider adverse.

‘Cause after a first round that was way interesting, with lots of tight tilts, the second round, absent the dominance of the Spurs, has been fraught with some truly baaaaaaaad basketball. Choke jobs. Inexplicably immature play. Etc.