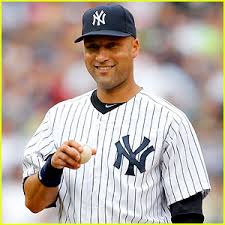 Baseball, despite the many athletic competitions which aspire to the lofty status, remains the most romantic, the most beloved of American sports.

At least, for us old farts.

The national pastime hearkens back to a more pastoral time, which, though long ago, far away and but a dream now, is what our nation still aspires to.

Among its many attributes, what baseball does best is signature moments.

It sets the standard when honoring its icons.

Last night was one of those nights.

Even for the legions that loathe the New York Yankees — as a Tigers fan, put my name on that list — Derek Jeter is the exception. He has been the Yankee, too good a player, too good a person, too good a role model, who has been impossible to hate.

The Yanks coughed up a three run lead in the top of the 9th against the playoff bound Orioles, allowing #2 one more final moment. Which he grabbed like the superlative he is, knocking in the winning run in the bottom of the 9th, with a walk off single RBI.

It was pretty damn cool.2

At the post game presser, Jeter was, as always, humble, self effacing, honest, gracious to his fans. (I trust Teddy Ballgame wasn’t so, if he talked to the press at all after hanging up his cleats for the last time.[/ref]

If there was any downside to the whole affair, it was the cloying, saccharine media aftermath.

Once upon a time, Bob Costas was as good as it gets. Last night, doing the play by play, with Jim Kaat by his side, the former KMOX stalwart couldn’t put the brush down even when the canvas was saturated with paint.

You know that ice cream place at Bardstown and Eastern Parkway, where you can put as much syrup on your sundae as you wish? And, sometimes, you simply can’t stop with the hot fudge until its flowing over the side of the bowl?

That’s what Costas, then the guys at the MLB TV studio desk, were like last night.

Which is a shame.

But I shan’t let it ruin the moment.

Like the evening watching Cal Ripken break Lou Gehrig’s consecutive game streak, I was mesmerized by how the moment turned more monumental than one could ever have hoped for.

So, now I shall put down my brush, set aside the ladle with fudge sauce, and simply say . . .

2 thoughts on “#2 Derek Jeter Walks Off”