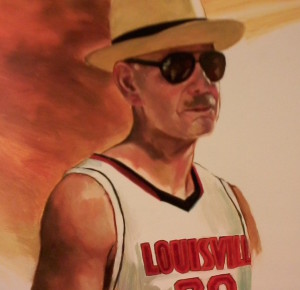 In perhaps the most stunning development of this the Week we call Championship, there is a mug to be seen on camera even more than Joey Brackets.

The World Wide Leader knows how to shill.

Christian Laettner, come on down.

Later on this coming Sunday, the one we call Selection, ESPN is running another of what’s frankly a marvelous series of films on sporting topics of interest.

This one is titled, as if you didn’t already know, “I Hate Christian Laettner.”

So, the network, now under siege by Fox Sports 1, feels compelled to let us college basketball fans what’s coming soon. Even though they told us about it for a minute and a half during the last media timeout of Brooklyn St. Francis vs. Robert Morris.

(The latter of which schools, champions yet again of the Northeast Conference, has a name which raises the blood pressure of BBN porch sittin’ good ol’ boys from the Purchase to the Pennyrile. Because, if there’s a game Kentucky fans would like to never hear of again as much as that last second loss to Duke, it’s the ignominy of that NIT L a couple seasons back to Bobby Morris.)

Anyway, should you not be aware, there’s a film about the Blue Devils most hated baller this Sunday night. My guess is you’ll know where to find it on your dial.

To be honest, I’ve never been enthralled that much with conference tournament week.

Oh I love the Lafayette/ American, North Dakota State/ South Dakota State championship tilts. They’re winners go to the dance, losers go fishin’ kind of affairs. The games are balls out, even if the quality of play isn’t textbook.1

But the others, like Big 12 quarter finals, are a who gives a big whoop?

Well, since it’s a year, where the eventual coronation appears preordained, I, and many of you, are looking for some hoops excitement to sustain us between now and that One big Blue Shining Moment.

There are so many potentially feisty battles scheduled today, I almost wish it wasn’t going to be so springlike outside. I’d feel less guilty about the full couch potato mode that I am so sure is going to develop.

Of course, the rubber match between U of L and Carolina tops the bill.

But it’s far from the only treat.

In the Big 12 alone, there’s Texas/ Iowa State, Oklahoma vs. Okie State and Baylor/ West Virginia, all with tournament implications.

St. John’s/ Providence has some meaning, and does Xavier/ Butler. Those would be in the Big East.

Can N.C. State best Duke again? Can the Hurricanes of Miami fight their way beyond the bubble with a W over the Fighting Irish?

Will Northwestern be the rotting Maraschino atop Indiana’s melting sundae?

That’s just to name a few.

Which is to say, my chores shall be completed by noon.

The Vernors and A&W are cold in the fridge. The mute button will be handy for those moments when Seth Greenburg is too much. I’ve seen enough of Lunardi and Laettner already that my immune system is braced and can carry me through the day.