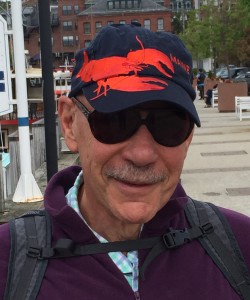 Okay, for what it’s worth, I’m back on the beat. Spent a long weekend in Boston/ Maine, with some old pals, swapping tales and hurling insults. During which interlude, I did my best to deplete the crustacean population during what I’m told is a bumper season for lobsters.

Lobster Roll at Fenway. (Where I witnessed arguably the most fundamentally unsound major league baseball game ever contested. Matched in college by U of L’s lapses against Fullerton.) Lobster Omelet at Inn By The Sea. Lobster Pizza at Saltwater Grill. Lobster Chowder at Union Oyster House. And, thus obsessed, felt compelled to purchase not one, but two, lobster adorned baseball caps to commemorate the indulgence. One of which, the “Mother of All Lobster Caps,”  I am wearing in the photo.

Robbed? Maybe so. Maybe not.

The umps ruled it hit the foul pole. Which eyesight observation was confirmed by NCAA Central.

Cards fans are not assuaged.

One wrote me with this terse message. “Worst call in the history of baseball.” Louisville AD Tom Jurich agrees.

Forgotten in all this braying is the simple reality, that the game should have been won by the Cards in regulation. Louisville AD Tom Jurich agrees.

Runners left on the pond, in scoring position, because hitters didn’t produce.

Another fan, he was at the game, texted me, “fundamentals here are not fun.”

This Louisville team left itself in precarious positions all season. They somehow persevered. It finally came to roost last night, in the game that mattered most.

My opinion of last night’s L. It’s the team’s own fault. It was not the disputed homer that did the Cardinals in.

Only schools on their game make it to Omaha.

Louisville simply forgot the fundamentals, when it mattered most.

At his press conference today, Rick Pitino said he thinks Cleveland is going to win the NBA title. In essence, he offered that LeBron is strong enough of a presence to impose his will on the proceedings.

Golden State looks not quite ready for the last spotlight. Not quite tough enough. A bit more reliant on the long ball than is prudent. Just a shade too freewheeling.

The Cavs are diggin’ in.

The league has acknowledged that the refs missed a couple of calls in Game 2.

A couple? Really, just a couple?

Taking more than a step and a half after stopping the dribble is traveling. Grabbing and hacking and impeding are fouls.

Meanwhile, in a bit of news you might have missed, were you not, like me, in the Portland, Maine area over the weekend.

He’s ranked in the Top 5 nationally.

Now that FIFA, the world’s soccer ruling body, is imploding before our eyes, the question remains: Will Russia and Qatar still be future hosts for the World Cup?

Were I a betting man, I’d say Qatar is toast.

. . . because when Vladimir Putin pays good bribery money, he expects delivery. Woe be unto any FIFA execs, free from scandal or not, who would take away Vladimir’s toy. Mr. Putin does not like to be crossed.

Thus, we would likely read of some car accident that would befall any such soccer exec, inclined to take the games away from Mother Russia.