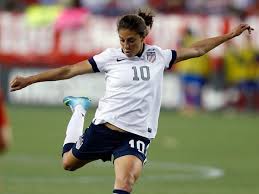 Her performance, arguably one of the greatest in sports on such a world stage, was, but for that miss, just as she planned. During training, Lloyd continually visualized tallying four goals in the final.

As it was, she scored six in the knockout phase of the competition, three in her stupendous final performance. One has to hope she forgives herself for falling a goal short of her plan.

But, let’s be clear, it’s not like her three successes aren’t worth considering one more time.

The first came on a corner three minutes in. The ball arching from the right corner, Ms. Carli zoomed in an arc from her spot on the left, catching the ball perfectly as it reached kick level. Japan’s goalkeep Kaihori guessed right. Lloyd went left.

Goal three epitomized how very much of the moment Lloyd was. Dribbling the ball on a counterattack, approaching midfield, she maneuvered past the defender. Eyes on the goal, she realized from half the pitch away that Kaihori had ventured too far from the goal. Lloyd deftly let it rip from fifty yards, a pop fly that just cleared the Japanese beleaguered keeper, nudged the left post, and nestled into the net, a confirmation that the tournament’s best player was not going to allow defeat.

With 74 minutes and stoppage time left to play.

The other fascinating vision, for me anyway, came during the thrill of victory celebration after final whistle.

Elder Abby Wambach, scorer of 183 career international goals, who had sublimated her competitive fire to accept a lesser role in the World Cup, raced toward the stands. Where she found wife Sarah Huffman, who leaned perilously, dangling over the railing for a victory buss.

While Wambach’s personal life, her sexual orientation, have hardly been a secret, one has to ask: Would Wambach and Huffman have expressed their joy so publicly, if the Supreme Court, just the week before, hadn’t given its imprimatur to gay marriage?

It is generally recognized that Brandi Chastain’s baring her bra victory moment after the 1999 World Cup title empowered America’s young females to take up soccer.

It is said that the U.S. of A. now has two million girls and women playing competitive soccer at one level or another.

I find it interesting that the WNT squad appeared so Caucasian.

The final of the Women’s World Cup had the largest TV audience for any soccer game ever in the United States. That includes games played by both genders.