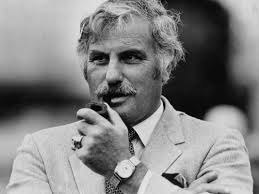 Oh those were heady times, the halcyon era when Howard Schnellenberger roamed the sidelines of gridirons across the land as THE meerschaum toting colossus.

From his days at Miami, his time at U of L, to his short stint as the erstwhile “Supreme Commander, Sooner Nation,” cut short by David Boren, the guy with the clankingest cojones in SoonerLand, to his years as His Highness of Hoot for the Florida Atlantic Fighting Owls, he was the Pigskin Poet Laureate.

And I, ever willing to ride the coattails of another to fame and fortune, hopped on board the skewed syntax and fractured bon mots of The Schnell, like Victor Espinoza on American Pharoah, to become a Behemoth of the Blogosphere.

SchnellSpeak of the Week was my franchise. A simple reiteration of the pigskin pontifications of Master Builder Howard Schnellenberger rocketed my clicks into the cybergalaxy.

The Schnell’s been in retirement these past few years, a Roving Ambassador for FAU.

But it’s oh so heartening to know that he’s lost nary a scintilla of semantical sensationalism, nor a grain of grammatical grandiosity.

The Schnell was in the house yesterday, as his protégé Jeff Brohm’s Hilltoppers won the Miami Beach Bowl.

Brandon Doughty’s performance notwithstanding, The Schnell was MVP.

On Brohm and the future of WKU football, he was his usual enormously eloquent self, “He’s brought that team along and brought it to a point where their next move is going to be monumental.

“If he does what I know he’s capable of doing, he can grow that university into a stratosphere they’ve never been in.

Of Brohm specifically, he issued this praise, “He’s sitting in the catbird seat. . . . (He has) a great opportunity to join the icons of the great game of American football.”