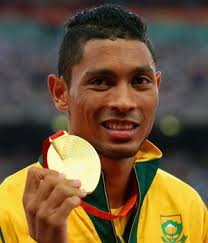 Note: If you are viewing this article on a smartphone, the photo in the body of the post might appear upside down. Not sure why. My apologies for any inconvenience.

Media Misses Mark. Oh how we in the media can hype.Were your ready, I mean, really ready for Katie Ledecky’s triumphs? Usain Bolt’s post posturing after his sure to come W? Another gold for USA in Women’s Futbol.

Okay, we don’t always get it right, but even if we don’t, there’s always a Hope Solo to say something really, ingratiously stupid.

So, Ledecky, and that guy swimmer, you know whatisname Phelps, gave us what we wanted. In record time a lot of the time, thank you very much.

Bolt took care of biz too, prevailing in the 100 meters as he’s done twice before. Then dominated in the headlines as he’s wont to do.

Just one problem. Bolt’s scintillating come from behind W to secure yet again his title as “fastest man in the world” was not the best performance in track & field so far this year in Rio. It wasn’t the best that very evening. Not the best consummation of expectation. His three Golds over eight years in the same event notwithstanding, not the best storyline.

The morning after, all we saw in the headlines was Bolt this, and Bolt that.

You had to dig to read about the night’s real star.

South African Wayde van Neikirk, who ran 43.03 in the 400 meters. Which was a World Record, eclipsing Michael Johnson’s mark of 17 years that many in the know considered “untouchable.” Oh yeah, van Neikirk won the race wire to wire. Running in Lane 8, from which victory had never been won.

Plus there’s the sweet back story. His mom was a great athlete who never got to compete because of apartheid. His coach is a septuagenarian great-grandmother, a figure so alien to the coaching world, security wouldn’t allow her on the track after her protégé’s victory, despite her proper credentials. Plus he trains on grass.

And tsk tsk to my fellow media types for sticking with their predetermined lead story, when it really wasn’t the most prominent above the fold headline from the night before.

The Baron Reconsidered. Those who’ve been here before know that I bleed Red & Black. That I’m a lifelong Louisville Cardinal fan, with no love lost for the arch rival UK Wildcats.

Since I never spoke one word with famous Kentucky hoops coach Adolph Rupp, I’ve stayed away from the conversation about his feelings on racial politics, watching from afar as that whole Texas Western/ Kentucky dialog has evolved.

I can attest to this. I was at that “watershed” NCAA title game in College Park. What I don’t remember is any talk at the time about an all-black team playing an all-white team. There were no Confederate flags in the gym on game night.

What I do recall is the Miners keeping the heralded Wildcats measured the entire way for the crown, while UK had no answer.

The topic came up the other day when I ran into former UK QB Paul Karem, who is working with others on a film titled “Black in Blue.” It is the story of how UK was the first SEC school with scholarship African-American athletes.

Paul pulled this photo up on his phone. I’d never seen it before. I asked how come this has never been published?  He then sent it to me at my request. 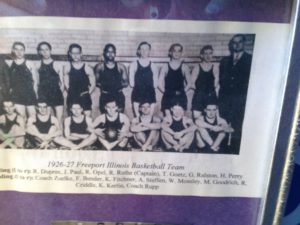 All I’m doing, without comment, and to provide perspective, is pointing out that Adolph Rupp had a player of color on his Freeport HS team which he coached before his years at Kentucky.

Make of it what you will.

Talking Turkey. A few weeks ago I wondered in this space why Russ Smith would sign a contract to play in Turkey, a country recently, now in lockdown, with Stalinesque purges ongoing?

Guess it’s safer to be an American baller there, than, say, a university dean, thousands of whom have been arrested.

So, he eschewed China, a repressive country to be sure, but one certainly more stable, to play for Galatasaray.

Now it appears he’ll be joined by another former Cardinal, E5 himself. Earl Clark, who did ball along the Great Wall last season after several in the League, has signed a contract to play for Besitkas in the Turkish League.

A pal with a greater handle on such matters than I advises Turkey is a better place to play, because the NBA pays attention, which it doesn’t do in China.

I still don’t get it.

Chinese swimmer who finished with Bronze in the Women’s 100 meter backstroke. Nice, but nothing of major consequence.

During a post race interview, she was doubled over from what seemed to be some sort of gastrointestinal distress. The interviewer asked her if she had a stomach ache?

Upon which she advised, she was having her period, and it was severe cramps, the mention of which is apparently, for societal reasons, a no no for female athletes.

So, good for her. Maybe that barrier will now be broken.