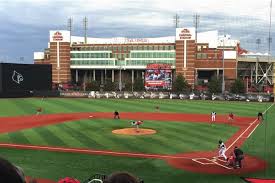 Since The Schnell pontificated that now infamous and iconic proclamation about his pigskinners — “We’re on a collision course with a national championship; the only variable is time” — several other U of L athletic programs have ascended further and faster than football.

And Dan McDonnell’s Cardinal baseball program, a once moribund sector of U of L sports, is now a perennial national contender. To which we tend to pay more attention than some of those other successful programs. Because baseball, ever unique, ever bucolic, remains the national pastime, if no longer America’s favorite sport.

A balmy night at the ballyard remains one of our nation’s treasures.

It is generally believed that one of these seasons, U of L will shake off the shackles and prevail in Omaha.

The Cards have made it to the Elite Eight thrice, ’07, ’13, and ’14, with a lone CWS victory over Mississippi State during that first appearance. And, truth be told, the team should have made it four straight years, meaning in both ’15 and ’16.

But, such are the vagaries of the game. Two seasons ago, the Cardinals’ ace reliever Zach Burdi couldn’t shut the door on Cal State Fullerton at The Jim. The Cards lost 4-3 in 11. Last season, when considered by many wags to be the nation’s best squad and title favorite, it was deja vu all over again. Burdi, regarded as the country’s premier closer, gave up a walk off tater at The Jim, and UC Santa Barbara prevailed by another 4-3 margin, then headed to Nebraska instead of the Cardinals.

But the Cards remain steadfast, continuing to reload as McDonnell works his dugout magic.

Louisville opened the season with 19 wins in a row, and have won 12 straight recently with only series at Clemson and Florida State on 3d Street, plus a midweek encounter with the Hoosiers and the ACC tourney at Slugger Field, ahead of seeking a fourth trip to Omaha and a collision with a trophy.

So, with Derby and my annual trip to New Orleans in the rear view mirror, and summer in the air on a baseball kind of Tuesday evening, I headed out to The Jim for last night’s Battle of the Barrel with I-65 SEC rival Vanderbilt. (The Commodores in fact nabbed that ’14 title in Omaha.)

Josh Stowers provided a souvenir for somebody on the berm, clearing the bases and left field fence in the bottom of the 2d with a three run shot. The Commodores got two back with well-executed sac flies in the top of the 3d. But Louisville proved it was to be its night in the bottom of the inning, when Colby Fitch singled in Devin Hairston, who led off with a double, for a 4-2 advantage.

The Cards added a couple more tallies for insurance in the 6th. Meanwhile Rabon Martin (4-0) got the win in his first Cardinal start, in four innings of work. Shay Smiddy (1-0), Adam Wolf (6-0), Adam Elliott (2-0) and Jake Sparger (4-0) shut down the 29-19 Commodores the rest of the way, giving up but four scattered hits and a lone walk.

The striking number there, at least for me, somebody who doesn’t claim any special expertise about baseball, is that the Cardinals’ five pitchers in a midweek encounter have a combined season record of 17-0.

Which is, you know, about as good as you can ask for.

Then there was RF Colin Lyman’s beauteous diving catch in the 5th.

It mattered not. Nor did the ofer evening by national player of the month 3B Drew Ellis.

Which is to say, the Cards are again deep, not dependent on their stars in order to prevail over good teams.

I haven’t a clue whether this team is the one that shall venture into territory where none of its predecessors have succeeded?

What I know is that they certainly did what needed to be done in a workmanlike 6-2 W over rival Vandy, whom they may meet again in the Regionals. I know that U of L is on course to be at home for the entirety of its hoped for trip to Omaha. But I also know that didn’t matter either of the last two seasons.

But, my guess is that Dan McDonnell’s nine, either this season or soon, shall be dogpiling in Omaha.

2 thoughts on “Cardinal Nine on a Collision Course???”