I just don’t remember a U of L team showing as little heart as the Cardinals did Friday at Rupp.

I am trying to keep perspective. To accept what a truly decimating set of circumstances has befallen U of L basketball. And how that has and will continue to adversely affect this year’s team, a gang which is obviously not going to meet unrealistic expectations.

So, I am thinking of the spirit force of the Two Arts, which I have invoked through the seasons when a Cardinal steps to the  charity stripe with the game on the line, or soon to be.

The first Art is Arthur Kaplan. My father. From whom I inherited the need to wear a mustache, ritualistic breakfast habits, the imperative to wash my face as thoroughly as my hands, and an unyielding love for U of L basketball.

The other Art is Art Zubrod, from whom I might have inherited my winking crankiness. But for the reality that our only familial connection is that his seats at Freedom Hall for Cardinal games were right behind those of my father’s and mine.

What the Two Arts had in common other than a first name and fealty dating back to days when the Cards balled at the Jefferson County Armory was an incantation, oft uttered in unison, as a Cardinal toed the free throw line.

“Make the first one.”

That’s what this beleaguered team and coaching staff needs to do, as it moves to extricate itself from the detritus of Friday afternoon’s debasement.

Make the first one.

To use the terminology of the 12 Step Recovery community: Do the next right thing.

I am but a fan. A loyal, long time, somewhat observant fan, but simply a fan nonetheless. I’m not sure exactly what small steps David Padgett and his nascent staff can or should take between now and tip against Pitt.

But my inclination is to suggest working on the small stuff. Reassess but act prudently and without panic. Find some passion.

Be the best, most focused Cardinal team you can be today. Do it again on the morrow.

What this team may not be able to overcome is its lack of personality.

There is also no leader. No take charge guy. No enforcer. No rah rah.

No Ellis Myles. No Peyton Siva. No Preston Knowles.

The elders on the squad, by nature of their muted characters, have not filled this breach. I don’t mean this as criticism, but it’s just the deal.

Maybe there’s a rookie who can assume the role. Maybe Greg Paulus from the bench can inspire.

If no identity evolves, all else that needs to be improved will likely remain in limbo.

Which leads me to this.

I believe I have a better understanding of what Rick Pitino was thinking early last summer when he got that call, offering a gift wrapped five-star with the potential of becoming his signature go to guy.

I believe the former coach, whose reign had morphed from soap opera to horror show, realized this squad was lacking. Donovan Mitchell was gone, though Pitino, ever the self preservationist, wished him to stay. Jaylen Johnson had been sent packing for still unfathomable reasons. Matz Stockman had been farmed out to Rick the Younger.

I believe Pitino looked at who was left, realized he needed more. That Deng Adel wasn’t really a take charge guy, either from a talent or personality standpoint. Nor was VJ King. That he hadn’t worked the Nasir Mohammed transformational magic with King and Adel or Mahmoud that his ego told him he could work with any player. That the freshmen weren’t ready yet for prime time. That Anas and Ray Spalding weren’t as much a physical presence underneath as he’d like and knew he needed.

So, I believe that thinking led him to not ask the questions about that gift wrapped five star falling in his lap like manna from heaven that any clear thinking coach already under fire would have asked.

What his ego failed to contemplate: Three strikes — Sypher, McGee, Bowen — and you’re out. 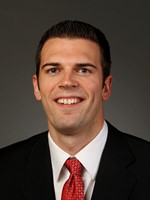 Among the criticisms that have been hurled the Cardinals’ way in the aftermath of the Kentucky loss are brickbats aimed at David Padgett.

Generally speaking, that he doesn’t have a clue what he’s doing, hire Brad Stevens now.

Specifically viz a viz the UK loss, that he should have reinserted Mahmoud and/or Spalding and/or both in the 1st when UK made its run, or played Perry earlier or (insert you particular plaint here).

As for the specific, I would simply point out that there would have been bigs to play had not Padgett’s predecessor run off Johnson and Stockman. And, frankly, Padgett appeared as shell shocked as the team and appeared frozen by the moment. Who among us in the same circumstances wouldn’t have been?

As for the big picture, I haven’t the slightest idea if he’s the right guy for the job. That said, not only am I inclined to give Padgett the longest of leashes while he’s the coach, I wouldn’t tether him at all. The guy’s in the mother of all impossible situations. He’s young. He’s inexperienced. He’s been thrown into an untenable situation.

Let’s hope he continues to learn along the way. I’m disinclined to hurl barbs his way, thrown as he was into the brightest of spotlights without warning or a reasonable chance to prepare.

Dana O’Neil, who shadowed Padgett on the eve and day of the UK game, has written an incredibly insightful article about this Cardinal squad and the state of U of L basketball.

I’d consider it a must read for all Louisville basketball fans.

It’s behind a paywall at theathletic.com. (Which is a great new, very literate sports site if you love college football and basketball.) You probably have to pay up, but here’s the link to O’Neil’s piece.

As for those undefeated women, it’s a different deal altogether. This squad is replete with talent and character.

I do not know if this edition of Jeff Walz’s women’s team is good enough to make that final leap. Winning the ACC. Beating Notre Dame and UConn, though they seem the equal of those two long time nemeses. Become the last team standing.

But, here’s what I believe. Like many Cardinal fans who consider the ’82-’83 men’s team to be Denny Crum’s finest though they lost in the semis to Houston, this is Walz’s best squad.

Asia Durr is a star that shines as brightly perhaps more so than Shoni Schimmel and Angel McCoughtry. And her supporting cast is undeniably better, deeper, and more capable than those of her predecessors.

Myisha Hines-Allen is, as the Two Arts might say, not chopped liver.

This gang plays great defense. They go. They grind.

The last second win at Georgia Tech was as telling as the earlier beatdowns of Top 20 foes. They gutted out a victory against a stalwart conference foe on the road. Walz fashioned a brilliant out of bounds set for the game winner.

Escaping the malaise that enshrouded U of L’s football and hoops squads this weekend, the Cards again pulled out a victory over tough North Carolina State. Even though they blew out to a 26-1 lead when the Wolfpack missed their first 24 shots. Then Louisville squandered the major portion of that advantage but held on.

Which success, keeping the ladies undefeated, provided a modicum of positivitude in the Land of L1C4 as the year turned.