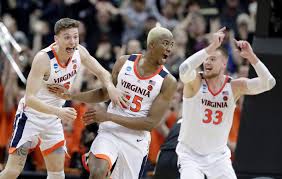 The conversation with the former U of L Cardinal hoopster took place on a school charter flight to New Orleans for the ’82 Final Four.

He shall remain anonymous. He’d spent the wait before departure at one of SDF’s mini-bars, and didn’t have the clearest of heads.

To be fair, I was more than a bit jacked up myself. One, because that trip to the season’s last weekend was far from a given for my favorite team, all things considered. And, two, because, well, it was back in the day, and you know, well, you know. Let’s just say, my pal who drove me to the airport suggested I might consider a Thorazine drip as an antidote.

Anyway, when the two of us were chatting in our excitement, I kept mentioning how the Cards were going to the Final Four and vaunted, Ralph Samspon-led UVa was not.

“Yeah,” he responded, quizzically since I wasn’t really making my point clearly, “they lost to UAB.” Which U of L had then dispatched on their home court in Birmingham to advance, after the Blazers had upset Virginia, who easily had U of L’s number.

OK, not a great story, but my point — then and now — is that Virginia has been viewed as one of college basketball’s chronic underachievers. Going back to the that era, when Sampson & Mates, often ranked #1, only made it to one Final Four, and an Elite Eight.

Plus, the Wahoos have been at the wrong end of inarguably the two biggest upsets in the sport’s history. To Chaminade in December of ’82. And, yes I know you know, by twenty points last season in the first round as the highest seed to UMBC, the lowest seed.

Coach Tony Bennett has for a number of years carried around the same baggage as such as Dean Smith and Jay Wright before him, “best coach never to win the crown.” Bennett, for his regular season successes had never even made it past the regionals.

Which is to say this monkey on Virginia’s back goes back further than just last year’s wipeout during the first No Break on the Dance floor.

Which is not to say Ty Jerome and Kyle Guy and  De’Andre Hunter, who didn’t even play in that infamous L because he was injured, and their teammates haven’t had to deal daily with that devastating setback 24/7 for 52 weeks, plus 3 more.

They did endure and prevail by being neither Cavalier (“courtly gentlemen”) nor cavalier (“showing lack of proper concern”).

This steely, steady, stalwart gang proved they are this season’s best, this season’s champions, under some pretty dire circumstances. With fortitude. With eery focus.

Some will poo poo the achievement, offering that the bracket opened up for them. Well, maybe, but they did have to beat the Big Ten champ, the SEC tourney champ and the Big 12 champ that possessed the highest rated D in the land.

I call them ready for the moment, ready to never give in, ready to do what needed to be done to prevail.

In each of their last three battles, the Cavaliers were down three in regulation with less than fifteen seconds on the clock. And won.

Hunter’s trey after Jerome’s feed. Guy’s triple and threepeat at the charity stripe. Clark’s retrieval and pass to Diakite and his make.

One such escape might be luck. Twice? Thrice? I don’t think so.

In the title tilt, they blew 10 point leads in both halves. And stayed the course and won.

For me, the possession that underscored how savvy this team and their coach are was one when they didn’t even score.

How many times last night did we hear Kenny and Charles and Grant and Raff decry how Virginia passed up too many shots early in the clock, and were forced to take a bad shot at the end of a possession? A lot. (All teams take bad shots, whether by choice or circumstance. Is it worse to take one with the shot clock expiring than earlier?)

My point: After relinquishing the advantage on a Jarrett Culver follow deuce with :35 to play, and a Tech timeout, the Wahoos chose to scurry, not to fool around. They understood that the wise maneuver was not to hold it for a last shot, but attempt to score ASAP. Jerome took it to the hoop as soon as they hurried up court. He missed.

After a couple of Norense Odiase FTs pushing their deficit to 3, UVa proved just as clutch. In eight seconds, they advanced the ball, Jerome  found Hunter in the corner, and he was all twine from behind the line. Game tied.

Oh yeah, Braxton Key blocked Culver’s shot at the buzzer that would have won it for the Red Raiders in regulation.

The Cavaliers went 12/12 at the FT line in overtime.

Did I mention Virginia’s defense was downright felonious?

The Virginia Cavaliers found redemption the hard way. They earned it.

2 thoughts on “UVa’s Not So Cavalier Road to Redemption”