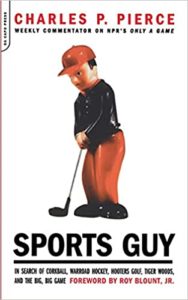 I’ve been known to steal ideas before, and here it comes again. Deal with it.

At theathletic.com the other day, writers covering different sports listed their take on the best books about each.

OK, there’s a nifty idea, I says to myself.

At which juncture, I perused the bookcases in my condo, donning one of my Covid masks, so I wouldn’t choke on the dust stirred up, and pulled out a few of my faves.

Murray, Ky. — You run up Route 641 to get here from Paris in Tennessee, because that is the closest place to Murray where there are any hotel rooms. You run past the browned fields, hawks, and vultures riding the thermals at different levels, and you run past the ponds, as still as Sunday morning. You go through Camden, where Patsy Cline’s airplane went down, and all the little farm roads off the highway seem to lead to churches, many of them the least common denominations. One of them, two miles up the road, calls itself The Church of the Living God of the Holiness of Holiness, which certainly ought to narrow things down. The way you know you’ve passed from Tennessee into Kentucky is that all the liquor stores and roadhouses seem to have disappeared.

There used to be another way to get to Murray, across a bridge that spanned Kentucky Lake from the east. But not long ago, somebody tried to fit a five-story barge full of NASA rocket parts under a four-story section of the bridge, and wedged it and the rocket parts there beyond retrieval. In other words, you have to want to get to Murray to watch the Racers play. If you don’t really want to, you can’t get there from here.

Charles Pierce, one guy’s opinion, is the best.

That’s the opening to his 2012 piece at Grantland about the Murray State Racer team that started the hoops season 24-0.

Okay, rather than blather on why I so cherish his written words, here’s how that piece continues for the next few paragraphs:

For over three months, and for 24 basketball games, people really wanted to get here. Murray State was the last undefeated men’s team in Division I. The Racers won the Great Alaska Shootout in November and then largely laid waste to the Ohio Valley Conference. Their rookie coach, Steve Prohm, had started his career with one of the longest undefeated streaks by a first-year coach in the history of college basketball. (The record is 33 in a row, held by Bill Hodges, whose first year at Indiana State found him gifted with Larry Bird, so there was that. Hodges, it should be noted, was an assistant at Murray State at the end of his career.) By the beginning of last week, the College GameDay crew had shown up, shooting B-roll and doing interviews. The Racers were becoming a story worth dodging the dairy trucks for.

This is where the energy of the men’s tournament comes from. This is where the momentum builds. It doesn’t come from the brand names, most of whom have locked up their slots sometime in August. Once the Super Bowl is over and done, places like Murray are the source of the anticipation that builds and breaks, over and over again, through the ludicrous fundraisers that are the conference tournaments, and over the four clumsily trademarked weekends of the tournament. An undefeated Murray State team would have been one of this year’s tournament’s great hunch plays, and probably its best story, and all of that was just beginning to build up along Route 641.

And then they lost.

Last Thursday night, Tennessee State came into the CFSB Center and beat the Racers, 72-68. Murray had several chances at the end to win, but answered three late TSU turnovers with three of their own. Suddenly, the Racers were not unique anymore. They were a 24-1 team in a second-level league. The B-roll never ran.

I mean, really, I’d settle for being that good one time and call it a career.

It’s 313 pages of your favorite pizza, accompanied by your favorite libation, followed by the most decadent fudge bomb ice cream cake dessert you’ve ever tasted. With seconds and thirds of all available, should you be able to savor more. All the while, the hottest date you’ve ever had in your life is sitting across the table with come hither eyes.

The stories are about, among many other sporting matters, Abe Lemons, and high school hockey in Minnesota, and the journeyman golfer who almost beat Hale Irwin for the U.S. Open crown, and corkball (from which the title quote came), and Cool Papa Bell’s cache of memorabilia, and the snake handling pole vaulter, and A Big Game.

More than anything else, a Big Game needs to have a sense of place. It radiates outward from the arena. It spreads itself beyond the stadium. Children slide down an icy sidewalk toward the warmth of the field-house doors. Halfway up the block, they can smell the popcorn. Time stops at midafternoon. The old men come out in their blazers. The women all wear camellias. The air itself seems to quiver and shake. The first time Florida and Florida State played football last season was a Big Game. It was in Tallahassee, all raucous with accumulated tradition, cheers echoing back through time and the generations. They second time they played football was in the Sugar Bowl. This was not a Big Game. It was merely for the national championship.

Be still my beating heart.

Among the cache of other faves now stacked on my desk, ones that immediately grabbed my intention is a book I frankly have no recollection purchasing or being gifted. Turns out it has been stored in the wrong place all the time, but shall be directed to its new home as soon as I’m done with this exercise.

Yes, you perceptive readers, it’s meant for the throne room, not the bookcase.

Its 486 pages are jammed packed with anecdotes, factoids, quotes and curiosities you can read about, then be pissed you’ve forgotten the next time you’re quaffing a brewski or two with your buds.

The writing is nothing extraordinary, but the entries are categorized. Short for quick reads. Medium for 2 to 3 page reads. Long “for those extended visits, when something a little more involved is required.” And Extended “for those leg numbing experiences.”

There are quick hit facts at the bottom of each page. Like Lou Gehrig was the first athlete to appear on a Wheaties box. Richie Ashburn once hit the same fan twice with a foul ball, not only in the same game, but the same AB.

There’s even a list designating, among other “worsts,” the Worst Matador. Some Spanish dude in the 19teens, though the guy I saw in Sevilla in ’04 at the only bullfight I ever attended, was pretty lame. The second guys, whatever they’re called, eventually knifed the bull to his demise. Pretty grisly.

Then, it turns out the matadors were staying at the same hotel as ours, and he tried to hit on my bride.

When reading the original listing of NBA books that catalyzed this idea, I scrolled through quickly, skipped over the entries for a lot of teams. I really couldn’t care less about anything having to do with most all of those franchises. I’m a college hoops guy.

Which didn’t stop me from heading directly to the Comments section, where I opined that this list was nice and all, but any such was bogus from the get go if it didn’t include Terry Pluto’s “Loose Balls: The Short, Wild Life of the American Basketball Association.”

When I went back to see if anybody had weighed in on my comment,* the first fellow pointed out that it had indeed been included for the section on the Memphis Tams in the Memphis Grizzlies entry.

*Admit it, you go back to see if your comments have generated any responses, and also that you’ll post comments without having read an entire article.

Anyhow, I’ve mentioned that book many times in the past, and it is a great, funny and informative read.

Among the others dusted off for mention is the estimable Dave Kindred’s 1976 love letter to hoops in the Commonwealth, “Basketball: Dream Game in Kentucky.”

With tales of Uncle Ed Diddle and his red towel, Orb Bowling and the chapter with my favorite title, “Louisville’s eating t-bone steaks. They’re winners.”*

*For the uninitiated, that’s what Adolph Rupp told his Wildcats, after U of L drew and quartered his charges in the ’59 NCAA Mideast Regional.

It’s hard to go wrong with a compendium titled, “The Best American Sports Writing of the Century,” when edited by David Halberstam.

It includes Tom Wolfe’s iconic Esquire piece on Junior Johnson, “The Last American Hero.” Richard Ben Cramer’s “What Do You Think of Ted Williams Now?” Thomas McGuane’s “The Longest Silence,” and too many more to mention.

I mean, there’s more than 700 pages of elegant prose.

“Sports Illustrated: Fifty Years of Great Writing” also lives up to its name. For decades, it was the gold standard of sports writing.

Included are George Plimpton’s classic put on, “The Curious Case of Sidd Finch.” The marvelous Dan Jenkins “There’s Never Been an Open Like It.” Frank DeFord’s Johnny Unitas obit, “The Best That Ever Was.”

Plus, you know, lots and lots more.

3 thoughts on ““The Pacific was a Home Run”: My Favorite Sportswriting”