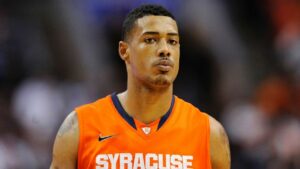 Former future U of L superstar.

That’s the snarky phrase I’ve used time and time again through the years to denote some gotta-have-sure-to-get-but-didn’t recruit destined for Louisville but not as much as the fanbase hoped for recruit.

It may not be as cute terminology as once upon a time. But, hey, it’s tried and true.

Too late to stop now.

So, yes, that’s one of those guys, Fab Melo, you see at the top.

Which is my circuitous way of hinting that I’ll be addressing the whole D.J. Wagner tug o’ war saga in a bit.*

*No need to scroll down for some late breaking inside info. That ain’t happenin’. Just going to offer some perspective.

But, first, let’s head down to the courthouse to see what’s going on?

Which is, imagine this, another lawsuit emanating from Louisville Cardinal athletics.

Will it never end?

As certain as I am about most matters, whether right or wrong, you shall get no answer to that rhetorical query in this space.

Seems that one Amy Shoemaker, a former counsel for U of L, has filed a whistle blower lawsuit, alleging she was treated unfairly after reporting some nefarious goings on in the basketball offices.

Like you know, an assistant coach threatening his boss while he is being terminated.

Do the names Chris Mack and Dino Gaudio ring a bell, Card faithful?

A gift that keeps on giving.

The chain of events, at least according to the Complaint as I understand it, goes something like this. Mack goes to then assistant AD Josh Heird advising he intends to fire Gaudio and Luke Murray. Heird consults counsel Shoemaker, who advises that Mack be told to have another person in the room. Which advice Mack ignores. Then the former head coach advises what he’s done to AD Vince Tyra, playing a portion of the tape of the meeting.

Shoemaker, believing a crime has been committed, goes the campus police. As I understand it, without consulting her superiors, especially the President Bendapudi. Who, according to Shoemaker’s Cause of Action was displeased to the extent it adversely affected Shoemaker’s duties and pay.

More litigation with University of Louisville listed as the Defendant has ensued.

Since I’m no longer a barrister at the Bar, I shall not render any opinion of her prospects for success.

All I will say is Geesh!

And wonder if Netflix has bought the TV rights for a miniseries?

Seems that Cardinal fans’ u-trou are in a bundle over the latest rumors & innuendo that You Know Who, grandson of that former Cardinal now serving in some capacity in the b-ball offices is definitely going to head up the road for his season of college basketball.

Which would mean that D.J. Wagner would immediately rise up to near the top of the totem pole of former future U of L superstars.

I frankly haven’t the slightest idea what Wagner will do. Having seen him play, I know he’s really good. I feel getting him, all things considered, is probably more important for Louisville than UK, which already has an upper echelon baller in that class at the same spot intending to come to Rupp.

But, if Wagner doesn’t don the red and black, so be it.

It will not be the end of the world, which is in a heap o’ heap anyway.

Here’s where I trot out the names of gotta-haves-gonna-gets-didn’t-get from yesteryear.

The above photoed Fab Melo. Whom the Cards were sure they were going to get up to the night before signing day. Then he inked with Syracuse.

Interesting thing about Melo, which I learned from minimal research for this screed. The kid could hardly understand or speak English. Which explains why even the most accommodating professors at Syracuse wouldn’t just pass him pro forma. Several academic suspensions resulted. The Orange even self-banned from a tourney. (Though, if memory serves, they weren’t going to make it that season anyway.)

Louisville, as I always remind, ended up with Gorgui Dieng. Who, recall, was the centerpiece for the ’13 title squad and his fashioned a solid NBA career with four different teams since.

There was Vern Fleming, who seemed to slip out of Cardinal hands, before balling for Georgia from ’80-’84. He was an Olympic gold medalist in ’84, and played 12 years in the league.

The Cards? Oh, they seemed to fare reasonably well during that time frame without him.

So too Winford Boynes in the ’75-78 time frame. He took his talents to San Francisco. The uptick in Cardinal hoops didn’t wane in his absence.

I might even mention Rex Chapman, who some delusional members of the U of L faithful believed would matriculate to the Belknap Campus instead that one alongside Limestone Street. Silly them. His stint at UK went from ’86-’88. During which time U of L, did just fine.

One of his teammates was Winston Bennett, a former Cardinal ballboy, for Naismithius’s sake. Say it ain’t so. Twas so.

Enough already. You get my point.

You’ve heard all this before. But it’s shared again to walk those precariously perched off the ledge.

Either D.J. Wagner comes to play for Louisville. Or he doesn’t.

3 thoughts on “Tuesday Tantrums: On the Court, In the Courthouse”