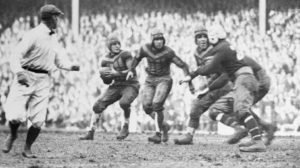 The usually spot on Elvis Costello missed his mark with this one, whatever the song really means.

At least this week, when he sang “Everything means less than zero.”

Because it is a time when college football junkies have come to cherish.

In the subsequent increments to come, as the numerology increases, when it shall be wall to wall football, and our faves and the big boys will be competing on the gridiron, such matchups as Wyoming vs. Illinois, UConn vs Utah State and Western Kentucky vs Austin Peay* will hardly be must see TV. But this first week, they are.

*Know how on PTI, Tony Kornheiser never passes up a chance to make a joke about Uranus? Similarly, whenever I mention that Clarksville, Tennessee institution of higher learning, it is an excuse to invoke the potty humor that is the greatest cheer in the history of sports, “Fly’s open, Let’s Go Peay.”

The addicted amongst us shall be fully heplocked up at high noon Saturday to mainline that first kickoff of the campaign from Bowling Green, Ky.

Soon enough, all but the most dedicated of fans for those schools shall clicking over to a game being contested across the pond.

Before considering that encounter, a word about Fox, a network that doesn’t shy away from indelicacy. (Hold your fire, commentariat, this isn’t about politics.) But, even for the Murdochs, welcoming back one Urban Meyer for their weekly pregame show seems . . . I dunno . . . tone deaf. Impolite.

Sure the sullied former mentor at Florida and THE Ohio State U. knows football, is an astute observer. But, given how his tenure ended in that pay for play league — Recall there was footage of him during a midseason leave of absence in a bar being twerked by a woman not his betrothed — it appears a bad call. Which is not to mention how he berated his staff and players, when it was his arrogance causing issues for his team. And was canned before completing one season.

I don’t usually tune in to those pregame shows. I’m doing just fine without seeing which school’s mascot big head Lee Corso dons. But when and if I do, rest assured, it shall not be the show with He Who Is Mentioned Above.

Among those first weekend, excuse me, Week Zero battles, one is of some national interest.

Northwestern vs. Nebraska. In Dublin, Ireland.

For the locals there, football means Bohemian F.C., Shamrock Rovers F.C. and St. Patrick’s Athletics. Are they ready to embrace Cornhuskers vs. Wildcats? Will they understand what it would mean if permanently ensconced Pat Fitgerald’s purple clad charges upend beleaguered Scott Frost’s Huskers?

Along with other battles during the day, though I’m not sure if I’ll make it to kickoff of the game, featuring the team deemed by their coach as the future of football, Vandy’s Commodores, as they venture to the South Pacific to take on the Rainbow Warriors. Past my bedtime.

As for who will prevail in those battles and others, all shall be revealed two days hence with Seedy K’s Peerless Pigskin Prognostications: Week Zero.

In theathletic.com’s ACC Roundup, it was 800 or so words in before there was mention of anything Louisville Cardinals.

In a section about the league QBs, there was talk of a “breakout season” for M Cunningham.

Other than that, nuttin’ honey.

As for consideration of my favorite team elsewhere in the national media, uh, not much more.

Suffice it to say, the Cards start the season, as we say, under the radar. Nationally, if not in and around Jefferson County, where the social media cognoscenti shall be ready to pounce at the first misstep.