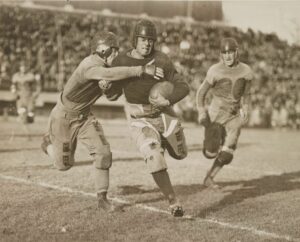 One was the Program of the Future (Ref: Coach Clark Lea) Vanderbilt, which contrary to the thinking of the Nation’s Premier Preditctioneer, did not let frolicking along Waikiki Beach get in the way of game performance.

Since the somewhat iconic Aloha Stadium has been condemned, the game was played at the Clarence TC Ching Athletics Complex “Stadium.” Capacity 9,000.

Maybe Rainbow Warriors coach Timmy Chang could harvest some pigskinners to matriculate from nearby vaunted St. Louis HS. Can any of those Little Leaguers who dominated the LLWS, outscoring foes 60-5 in 6 games play QB?

The other schools taking a red eye were Pat Fitzgerald’s ever feisty Northwestern Wildcats, and . . .

Yet again, and it’s almost inexplicable, former favorite son Scott Frost’s charges were Hüsker Dön’t. Seven single digit Ls in a row. So many more during what what was supposed to be his triumphant return to Lincoln.

So, as Bookstore Billy inquired rhetorically, how much fun do you think that flight home from Dublin was ?

There are two rumors afloat, neither of which I have been able to confirm. One, that Frost advised after his postgame presser, he was going to quaff a few more of those free stouts, told his staff and team “to go on without me,” and he’d catch the next flight home. Is Urban Meyer his whisper counsel?

The other that Frost directed the pilots to fly to Shanghai and drop him off there.

Kegs of Guinness® Extra Stout were spotted being loaded on Air Wildcat.

While the lei-adorned Commodores were seen boarding their flight with coconut-infused concoctions that had them grinning.

When discussing Saturday’s outcomes with Smart Guy, he invoked a term oft read here in reference to said Scott Frost.

I mean it was only Week 0, yet after the game he had to answer if he was going to resign?

Which is to say he has a head start on Auburn’s Bryan Harsin to the front of the line at the Unemployment Office.

Not especially known for his musical tastes, Wolverine mentor Jim Harbaugh was heard humming the John Sebastian-penned ditty over the weekend.

In a strange, seriously indecisive turn, he named his starting QB. Plural.

One for he opener against Colorado State. Cade McNamara.

Another for Michigan’s second of four opening “battles” in the Big House. J.J. McCarthy.

Not much tension or pressure in that QB Room. Ya think?

C-J’s Alexis Cubit has penned a really excellent piece on M Cunningham, how he evolved, and why he’s the clear leader of the Louisville Cardinals.

They could be a factor when league play starts. Oops, my bad, the university remains adrift pigskinwise, one of 7 FBS independents. Six of which are not Notre Dame.

Things get contentious, starting Thursday in one of spiciest Week 1s ever.

First taste of 12 course feast is being plated.