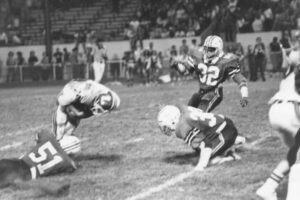 My normal modus operandi when covering a U of L game, any sport, whether noon or night, victory or defeat, is to sleep on it, then offer up my observations the morning after with full game stats in front of me for reasoned breakdown.

For a couple of reasons, given the Cardinals seriously disappointing performance in their season/ ACC opener, I’m knocking this out While The Game Is Still Underway, starting just after the Orange increased their advantage to 31-7 with 8:40 left.

I don’t want to have to deal with it after I wake up.

Plus, for some reason, I’ve had trouble meeting the sandman, and have been chasing slumber for several days now. Hopefully putting this disheartening, dispirited effort behind me, I’ll be able to sleep in.

Plus, there isn’t a single reason I can think of to spend a nanosecond mulling over the numbers. I really could care less.

Most schools use the same site for running game stats. Metaphorically, it was frozen for the first five minutes of the game. Then locked up till the end with 10:42 left in the 3d.

First, kudos, credit where it’s due.

New ‘Cuse OC Robert Anae’s game plan was astute, creative, and had the Cards on their heels from the get go. Former Cowbell State QB Garrett Shrader ran it to perfection.

A week or so ago, by chance, I happened upon the ACC Network’s look see at Syracuse. These deals are by their very preseason nature ever upbeat.

But I mentioned to a couple of pals how there was an eery sort of confidence that seemed based on something legit. I certainly couldn’t put my finger on it.

It proved well founded. At least against a Louisville team that simply failed to post.

Syracuse shredded the Cardinals, even while just committing its 18th penalty with 1:24 left.

Forget execution, I am scratching my head at some of the decision making.

Just one example was the choice U of L made after the victors went up 17-7 in the 2d.

Cards got a relatively nice kickoff runback out to their own 31. That’s +6 over taking the touchback. But Syracuse was offside. Louisville opted for a rekick, ended up starting the drive four yards deeper in their own end. Huh?

Soon enough U of L ran that nifty trickeration — Braden Smith to Tyler Hudson for 45 yards.

Setting up the interlude that sums up the entire affair. The Cardinals couldn’t score when they had a 1st & Goal at the Orange four yard line.

His performance was hardly the only headscratching one, but M Cunningham’s 2d half meltdown  is noteworthy.

The pick in the endzone, when Dee Wiggins seemed open for a TD was probably not Cunningham’s fault. The Syracuse DB made a hell of a play, and not seeing him circle back to the ball from outside peripheral vision is understandable.

But the interception the Card signal caller tossed on the next possession was horrid. He threw into double coverage, right to the cover guy.

On the next series, Cunningham fumbled. Which miscue was magnified. As the ball was bobbing unclaimed on the turf, it hit a Cardinal lineman on the arm and chest and he not only didn’t secure it, he didn’t make a move for it.

Syracuse soon increased its lead to 24-7 when a receiver was wide open in the endzone. As in literally Wide Open, not a defender within ten yards.

It was not their last score.

What a revolting development this is.