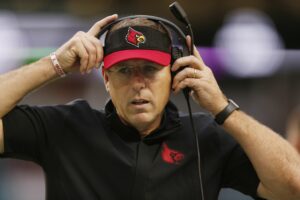 Lookee there at who be doin’ the Big Bounce Back at the Bounce House.

Check out who did the improving in the Reedy Creek Improvement District.

Bouncy bouncy that, Chinstrap Planet. (And that includes all the doomsayers residing in the Greater Louisville Metropolitan Statistical Area.)

In the grogginess of the morning after — flush with the thrill of victory, I savored the end of the tennis match, not that I could have fallen asleep immediately after the victory anyway. — a song came to mind, my favorite of the Louisville Doo Wop numbers from my youth by the Trendels.

Yeah, it’s just a game. But tell me this. Is your Saturday going to be a little more fun after that win? Mine is already, and I haven’t even had any coffee yet to fully wake up.

Thanks to these moments.

Like that Jarvis Brownlee pick on a Knight 4th & Goal from the 6 with under 3:00 to play. Not too huge or anything.

But here’s what happened in my world after that somewhat controversial play. Which might have been a pick. Or perhaps maybe just a break up. Or, don’t say it, a Central TD.

Here’s why I present that last option, a sphincter tightener for me I’ll admit, even if you hadn’t considered it.

I’ve mentioned how we media types get to tap into the running official stats. Which in some cases, depending on the interweb connection at the sending facility, come seconds ahead of what we view on our TV feed.

So, while the zebras are looking at the monitors, and Brownlee is struttin’ his stuff with some belt over his shoulder, my eyes are glued on my laptop screen, awaiting confirmation that U of L has come up hugely at that critical moment in the game, and, yes, the season.

And, my heart seized, when I saw a box appear at the top of the page, indicating a UCF TD. True. Aghast, my note pad thrown to the floor, my pen across the room, I forlornly looked at the telly.

To hear that the call on the field — Interception — stands or is confirmed or whatever. And the box is gone on the screen. Instead I read that it’s Cards ball on the 20 with 2:52 left, the margin preserved.

Of course, the ever Cardiac Cards — it’s as true now as it ever was — weren’t going to let us breathe easily just yet. They failed to get a first. Giving the homies one last chance at victory.

But, thanks to another Brownlee breakup, another by Josh Minkins, and pressure from the D Line, the Cards overcame another gift of an offside penalty on a 2d & 10 at their own 42, when John Rhys Plumlee misfired on 4th & Ballgame at the 37.

My snark at the moment: This is why Lane Kiffin didn’t play you at QB at your previous stop. And, what ya goin’ to be playin’ on the 88s when you  get back to your room, some blues tune I am so sure?

Then there are these moments after moments when the Cardinals D played as good as it has in a long, long while.

The longest of those possessions was 2:49.

Then there was M Cunningham’s finally-where-has-this-been-butterfly-out-of-the-coccoon moment with 2:46 left in the 3d. A deft 43 yard scamper around the left to paydirt for a 17-14 Louisville lead. Which, thanks to that tenacious D, they did not relinquish.

There were, of course, a few uh-I’m-not-so-sure-about-this moments. Like the squib kick after that TD, which fortunately rolled all the way for a touchback.

And that ????? decision to go for it on 4th & 4 at their own 47 late. Though, before the naysayers light their torches and head out into the night, it is legit to consider that Satt saw what his D was doing, and felt some confidence. (I am so very sure my loyal commentariat shall weigh in on that below.)

Cunningham’s passing was, let’s be generous with the win and say, iffy. He started out 5/5, but was 9/24 the rest of the way.

Anywhoooooo . . . I know there’s more. But I need caffeine.

Before I take my leave: at this moment of the season, there’s this sort of hackneyed consideration. Before the campaign began, would you have been happy with a 1-1 start, the second game coming against a team I believe the announcers said had won 31 of their last 33 at home?

My hand is raised.