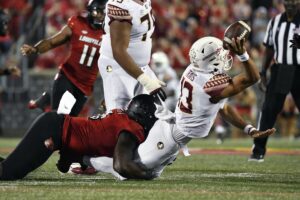 Heralded as it was, the film ranks easily with my least favorites.

In which, there is nothing more than Andre Gregory and Wallace Shawn sitting around a restaurant table, pontificating over each other about this, that and who cares. Literally, nothing else, other than the occasional quick visit by a waiter.

For reasons I needn’t delve into, I was not at Cardinal Stadium Friday night.

Thus, for the second weekend in a row there was an interlude which ranks uncomfortably with my least favorites, “My Friday with Andre.”

I have owned that I am not a very astute observer of the technical aspects of football. It’s why I love good color announcers, who actually explain what’s happening, why a receiver is wide open deep, how the line opened a hole, what sort of play or defensive alignment would best serve the moment.

Like me, Andre Ware doesn’t seem too astute either, ever guessing wrong at what a strategy will be.

But we both got it right last night.

From the get go after halftime of Florida State’s 35-31 win, Mike Norvell made adjustments for the loss of Travis Jordan as signal caller to accommodate his replacement with different attributes. U of L countered with some defensive tweaks aimed at pressuring the redshirt freshman.

Ware, to his credit, noticed and mentioned early on after intermission how Seminole wideouts, especially 6-7 star of the game Johnny Wilson, were getting one on one man coverage with no safety help. The victors exploited that mismatch twice on its scoring drive to open the 3d.

As State lined up for snaps from then on, I couldn’t take my eyes a Seminole receiver spread wide with a lone Cardinal to check him. The Noles however put that advantage in its pocket, and were stifled for the rest of the quarter. Oh so cleverly it appears in retrospect.

Meanwhile, the Cardinals offense showed up. And M Cunningham, with one of those highlight runs of his, pushed Louisville ahead 28-21 with an 18 yard scamper on the second play of the 4th.

Yasir Abdullah  and YaYa Diaby sacked Tate Rodemaker on the first play of the ensuing drive. There was a stoppage after the play, when the visitors left tackle went down.

Honest to Betsy, here’s what I wrote in my notes during that delay: “Man coverage on flank no deep help Will it burn Cards?”

Oh that it would have been just worry wort me, that all would be well, and the Cards would sneak in an improbable W for the second Friday with Andre in a row.

It was at that moment, for me anyway, that Destiny showed her face.

That presence was confirmed, for me anyway, when the Cardinals settled for three on its next possession.

It became fait accompli on the victors next drive. Jarvis Brownlee had to commit what was actually an astute infraction to prevent another deep bomb to That Guy. Who scored anyway soon thereafter on a laser from Rodemaker for the winning tally.

Early on in the 3d, one of my peeps texted, expressing how the Cards were turning Florida State’s theretofore little used sub signal caller into Tom Brady.

But I sure did have visions of another second stringer forced into action against U of L who rose to the occasion.

4 thoughts on “U of L GameNotes: Florida State”