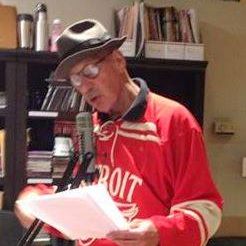 So, yeah, the first thing a reader might notice with this week’s Monday shtick is yet another self aggrandizing photo of your inveterate, snarkadelic scribe. (Yes, it’s a little blurry, so what.)

Leaning into my NIL self.

You know, Name, Image, Likeness. I got a collective.

I do have a smidge of something to use as an excuse. I read an article in the Post or the Times one, where a reporter and two pals attempted to relive that day Ferris Bueller took off in the Hog Butcher of the World.

One of Ferris’s cohorts was young Alan Ruck — He’s the other brother who wants to be president in “Succession” — as Cameron. Who spends the day in a Red Wings sweater.

Son of Motown, I got one of those, says me. Throw it up there for vanity’s sake.

Now on with the real foolishness.

Smart Dude called me on Sunday, inquiring what I’d been doing over weekend?

At which moment, I was about midway through My Sunday With Scott. As in Hanson. As in the wonder that is NFL Red Zone. Put down the clicker. No commercials. All the action. Of more than a few games that went down to the wire.

“Watching too much pigskin yesterday and today,” I respond, “I just wish it wasn’t so nice outside, so I wouldn’t feel so guilty about it.”

But observing Kyler Murray made it all worthwhile.

He scrambled 85 yards on the game tying two-point conversion. Late. Very very late. Like after the clock hit 00:00. Those Cardinals eventually won on a fumble pick six in extra time.

And then there were the Real Mountaineers.

Let’s do chat about Appalachian State for a moment.

Lee Corso and his crew were in Boone for the game against Troy.

Which tussle ended with one of those forehead thumping Hail Marys. Where as the bomb was bouncing about in the air, it drifted back to an App Stater at the five yard line, who ran it in for the winning score, as the home radio announcer went bonkers.

But I want to make a point, big picture.

Sometime, it might be the program not the personnel in charge.

Former Mountaineer headset Eli Drinkwitz slipped to Mizzou. Where he has yet to catch fire.

Former Mountaineer visor Scott Satterfield slipped off to, well, you know. Where the faithful are mumbling and grumbling. At least many if not most of ’em.

Something’s happening there, and we haven’t quite figured out what it is.

What we do know is that any list of biggest upsets in college pigskin since C6, H0, includes App State’s Ws in the Big House and a couple weeks ago in College Station.

So, too his DC, fired by replacement head coach, Mickey Joseph.

Which brings me to one Robert Petrino.

Who returned to the scene of one of his many many imbroglios, when his Missouri State squad took on the Razorbacks in Fayetteville.

When I noticed on the crawl that Bobby’s fellas had jumped out to a 17-0 lead, I grabbed my laptop to watch, while other battles were on the big screen.

I will most often pick a side when viewing games between teams that aren’t my darlings. But rarely does it rise to the level of pit in the stomach nervousness rooting like a Mo Fo for one squad over another.

My disdain for Coach P is well documented. I was all in on Wooo Pig Sooie. It was with relief that the game played out as Bronconagurskius would have it

There are those around this town — they know who they are — who believe he’ll be back in the big time sooner rather than later. Possibly before this campaign is done. It’s not like he hasn’t done that before.

Will the Cornhusker Nation be willing to sell its soul?

Will the coach be whistling “By the time I get to Phoenix”?

To twist a cliché, This is NOT what college football is all about.

Undefeated in three battles, Duke visits Lawrence to take on the home town Jayhawks, who also sport an unblemished record after its initial trio of games.

Yes, if you ever needed proof of global calamity, this is it. The Chinstrap World has turned on its axis, the plates have shifted underneath.

No Jon Scheyer. No Bill Self. This is not that Monday in April in a Dome somewhere.

Flavor of the Month Lance Leipold will roam the home sideline. Miracle worker Mike Elko shall be on the other.

To invoke another too often used phrase, Must See TV for anybody addicted to football.

My hand is raised.

Oh yeah, my ever hapless Detroit Lions came up big yesterday. Beating up on the Washington Whatevertheircallednows.

1 thought on “MMQB: Too Much is not Too Much”