After streaming a flick the other night — “Kimi” on HBO Max, pretty nifty technothriller — the realization came I hadn’t watched but a couple of plays in the Wake Forest/ Mizzou Gasparilla Bowl. Not that I gave a lump of coal about the game or who won.

Yet then realized how different this year’s Bowl Season has been. Something’s been missing.

Yes. No Joey the Vig’s Bowl Pool. Which would have me and about fifty others hanging on every fumble, pick and FG every silly Bad Boy Techno Taco Burpee Bowl until way after our bedtimes.

About fifteen years ago I was at a holiday party. In the corner of the den the TV was tuned without sound to the Fruit Company Cumquat Bowl or some such. What did happen to my benefit was Syracuse either made or missed a FG — who can remember details — which kept the kid alive for top spot with the Vig. I let out a scream, raising my hands in triumph, walked through the house like Ali after downing Liston.

Only The Professor, another annual bowler bozo, understood.

The Vig passed away suddenly a couple of months back.

Joey the Vig was a fictional ID fashioned for my pal John up Michigan way. A retired teacher, he loved numbers and odds and charts and data bases and football. He’d host such contests. A 13 run pool in baseball. Monthly pick ’em pool during football season.

And, my favorite, the Bowl Pool.

Not only because I could milk it for some blogs. I won it a couple of times, pocketing a little moolah.

So, to honor and in memory of dear friend Johnny Wags a/k/a Joey the Vig, find herewith America’s Premier Pigskin Prognosticator taking on the challenge of picking the winners for the remainder of the Bowl Season.

And, yes, it’s twu it’s twu, Against The Spread. (As set by Vegas Insider on 12/24.) END_OF_DOCUMENT_TOKEN_TO_BE_REPLACED 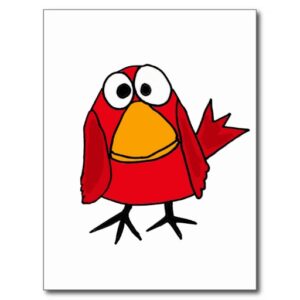 On the hardwood: Louisville 72, Wright State 73.

It goes without saying, but it shall be said here anyway.

Saturday was not the best of days for the University of Louisville Cardinals.

What follows are a few thoughts without any in depth analysis of either loss.

For which in depth breakdowns, to be quite honest, your scribe has zero inclination.

In advance of Kenny Payne’s impending arrival as U of L’s next hoops mentor, it was well supposed that Nolan Smith would be joining the staff. Which he did not long after Payne’s introduction.

Given that KP had never sat first chair, your BW/LTCD opined to any all who might listen that his fondest hope was that there would be an astute,  knowledgeable, successful, long time coach, old head named to the staff. Like Penny Hardaway added Larry Brown. Or Phil Martelli at Michigan. Ralph Willard right here.

It did not happen. Your scribe’s advice was not sought out.

Such a lack of experience and acumen seemed apparent at the end of the Cardinal’s L to Wright State in the embarrassingly empty Yum! Center. END_OF_DOCUMENT_TOKEN_TO_BE_REPLACED

Upon double checking last weekend’s results, this tally does appear to be correct.

UCan won yet again, this victory over UMess. Tulane’s Green Wave continue their surge. Kentucky showed Mizzou. Georgia, as anybody with any sense should have known would happen, manhandled Rocky Top.

And the University of Louisville Cardinals won their fourth straight, with a dispatch of L’il Jimmy Madison.

Double checking what was written in this space last week, as if that was really necessary, your inveterate Pope of Predicticators proved yet again why he remains the Pontiff of Perfecto Prognosteration.

Because all those results were anticipated and reported in advance.

It’s good to be King. 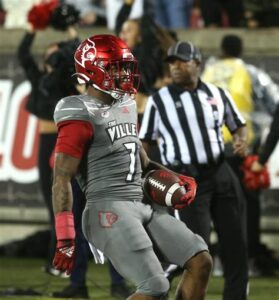 Won if by land.

Which is an admittedly lame skewing of iconic American poetry. Yet it somehow fits for U of L’s 34-10 W over BCS rookie James Madison.

Its fourth victory in a row makes Louisville bowl eligible.

Against the nation’s statistically best rushing defense, U of L gained but 46 yards by land before intermission. After which the game was knotted 10-10 and any outcome seemed plausible.

After the break, U of L’s defense stepped up hugely for the third game in a row.

Tiyon Evans 71 yard first down rumble on the U of L’s second possession after the break was the Game Changer. OL’s zone blocking to the left side was perfect.

Evans found the crease, then galloped through every Middlesex village and farm to paydirt. (Forgive your wacked uncaffeinated scribe, whose mind wanders aimlessly yet again on an early Sunday morning after.)

What happened after the break? END_OF_DOCUMENT_TOKEN_TO_BE_REPLACED

There is an arch nemesis residing in the Chinstrap Nation. His persistent schadenfreude is such that he chooses never to miss an opportunity to berate your prodigious prognosticator for the occasional miscue.

So, last weekend, as the Noon games were winding down, your Pope of Predictionators decided to head him off at the pass, communicating to him that somehow incorrect choices had already been made in 60% of the weekly picks.

And he needn’t need to musktwiddle it out to the cyberverse, thank you very much.

Syracuse hadn’t yet recovered from its first L the week before in Death Valley, and fell to the Golden Domers in the Carrier Dome.

Auburn — Why on earth would someone allegedly sound of mind dub them to be the victor? — fell to the Razorbacks in Jordan Hare Stadium. Which is reported to have been bereft of spectators by the 4th Q. Thus the Toomer Toilet Paper Removal Corps got the week off. And, in the aftermath, to the surprise of nobody, Bryan Harsin was relieved of his coaching duties.

And Miami, under the guidance of Mario the Savior was down 3-6 at UVa, with under a minute to play.

But, lo and behold, in a barn burner of a snoozefest, the ‘Canes scored and prevailed in OT#4, on a two point conversion.

Which set the stage for two phenomena in my neck of the woods.

One, a day of joy for the Red & Black Faithful, as the Cards whopped Wake up one side o’ the head, the other and over under sideways down. While the Cats were checkmated on Rocky Top.

Both of which were correctly crystalballed here. 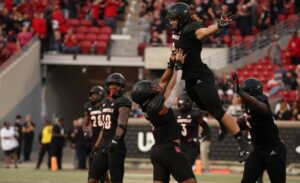 Clear your eyes with some Systane®.

This was not a fever dream.

This was not an LSD flashback.

This was not the wine you had too much of.

Nor a double shot of your baby’s love.

What you witnessed actually happened.

This was Steel Curtain D.

In the 2d half of the University of Louisville’s evisceration of Wake Forest, the Cardinal defense drew, quartered, chopped, sliced and diced, julienned, deboned and defrocked the 10th ranked Wake Forest Demon Deacons.

Louisville, screwed when a WF TD that wasn’t a catch was allowed, was down 13-14 at intermission, the offense frittering away a chance for a late lead with consecutive penalties on made  James Turner FGs.

Then the world turned.

So, here’s how it works around here at Seedy K Sports Tower, located somewhere between the Old Sears Building and the Old House Restaurant.

On Tuesdays, your nationally renown predictarian, often referred to reverently as the Pope of Predictioneering, is provided with reams of data by his Algorithmic Analytics Support Staff. After consuming said digitally generated assessments, his picks are promulgated.

As part of that raw data, there are built in codified tweaks to favor those whom said expert favors.

Or so it is supposed to be.

Heads are now on the chopping block, but not quite rolling on the floor . . . Yet. But soon. Because, someone who shall soon be standing in the unemployment line at 6th & Cedar failed to program properly.

Otherwise, He Whose Name Is On The Line Weekly a/k/a BW/LTCD would have picked his ever faves, the upticking Oregon Ducks, to best former Quack mentor Chip Kelly’s UCLA Bruins.

But noooooooo. So the miscreant creating that mistake be beggin’ for spare change soon enough in the parking lot outside Dirty Krogers a/k/a DK (pronounced decay).

Had he been doing his job, last week would have been what they call across the pond referring to that other football, a clean sheet. 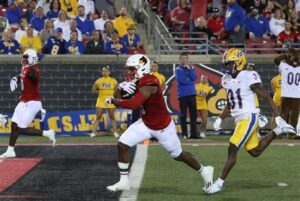 And now for something completely different.

Fear not, Louisville’s 24-10 victory shall be discussed. At least in part.

Rare is the occasion that your beat writer/ long time Cardinal diehard (BW/LTCD) misses a U of L game in real time. Either in person. Or on the telly.

He has shared the cautionary tale of missing a Card home hoops game in the early 70s to attend a Neil Young/ Linda Ronsdadt show at the Gardens. Ending the evening in the ER after his post show intoxicant-induced rear ending of a vehicle, which had already been in an accident at 2d & Liberty with gendarmes already on the scene.

His claim that U of L sports has been the love of his life is true and real.

So too, his firm belief and understanding that rock & roll has provided as much if not more emotional and therapeutic sustenance throughout.

Jeff Beck was in town.

At the same time as U of L vs. Pittsburgh kickoff.

Set the DVR. More on the somewhat strange show at the Palace to follow. 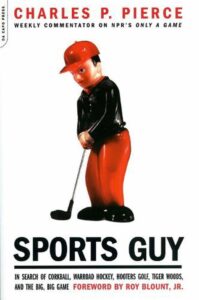 There are a couple of reasons why I’ve graced this article with a photo of the cover of Charley Pierce’s magnificent collection of essays.

Not the least of which is that they are adroitly perceived and exquisitely rendered.

Writing on any subject matter doesn’t get much better. Check it out.

But also, if like some around here, you have little other life and nourish yourself with athletic contests, meaning you’re a Sports Guy (gender neutral), it was a veritable smorgasbord of a weekend.

With the peripheral benefit for some, that they could watch without their favorite teams competing, thus eliminating the angst factor.

It all started, in these environs anyway, with a Friday night sighting of an octopus on the ice.

Some readers may get the reference, even if they could care less. END_OF_DOCUMENT_TOKEN_TO_BE_REPLACED

How’s a predictioneer supposed to intuit three days before kickoff whether the greatest QB not only in the history of the conference where they care more, but more than likely ever anywhere in intercollegiate football since St. Louis Billiken Bradbury Robinson tossed the first completed legal forward pass against Carroll College in 1906.

I am of course speaking of Kentucky Wildcat and Mel Kiper dandy Will Levis, who was forced to sit out UK’s L to South Carolina last weekend because of turf toe. Thereby decreasing his team’s chances of prevailing, and, more important, costing me a correct pick.

Flavor of the Month Kansas also fell to Texas Christian in an anything a Jayhawk can do a Horned Frog can do too barn burner of a finish giving the visiting team in purple the W. Wrong again.

But the UCLA Bruins, North Carolina State Wolfpack and, most significantly, Louisville Cardinals did win.