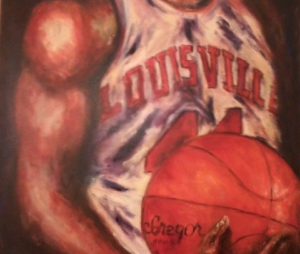 It is a noun rarely used in the sports vernacular, more usually found when some fashion guru with a purple pen is describing the John Varvatos spring men’s clothing collection.

But, ever the rebel, with a mind still a bit hazy from overdoing it in the 70s, I won’t back down. Since it’s the word that came to mind as Mangok Mathiang displayed any number of moves around the hoop in a cruise control 90-67 U of L W on Saturday afternoon in Chestnut Hill.

Mangok Mathiang, Silent K, a guy a pundit recently called “a solid third string pivot” — OK, it was me. A center of which it was stated, “he’ll never be a force of consequence on offense.” Yeah, that was also c’est moi.

So, excuse me a second while I take another drink of water to wash down my words and some gristle of crow.

Like a butterfly from a coccoon, Silent K is morphing into Special K.

Which is probably a bit too much hyperbole. But, really now, who saw this offensive, uh, panache coming? Certainly not me.

In 24 minutes of action off the pine, MM canned 7 of 11 shots from the field and both of his FTs for 16 points. Yes it came against Boston College, an eminently mediocre squad with little inside presence . . . but still.

Those shots that he’s short-armed throughout his career are now caressing the board and netting.

And he’s still windexing that glass and playing steady D.

It’s February kids, in the wackiest college hoops season in memory, and another piece of the Cardinal puzzle has apparently found its spot. END_OF_DOCUMENT_TOKEN_TO_BE_REPLACED

Thus, the trio’s first half stat line provides empirical evidence of how good the Cardinals’ defensive game plan and execution of it was.

While Edwards is somewhat lithe, like his Cardinal foes, Swanigan is an NBA-ready beast. (Which he put on display after halftime.)

My point is this. U of L’s thin but long bigs proved they can perform at championship level when they have time to prepare and follow Rick Pitino’s game plan.

Because, it was proven yet again that the Louisville coach is as good as there is or has ever been when preparing a team for a game if he has time. His plan was to give up threes but minimize the impact underneath. Good strategy. Good execution.

It worked perfectly for a half. And was a winning formula for the tilt, as U of L prevailed, 71-64. END_OF_DOCUMENT_TOKEN_TO_BE_REPLACED

After eleven minutes of play, Coach Rick Pitino was, to say the least, not a happy camper.

(I’m being gentle. This is a family friendly blog.)

At that juncture, the Purple Aces, shorter by 3′-5″ per man, were matching the taller Cards carom for carom off the glass at both ends.

As quick or quicker than the speedy Cards, Evansville had beaten U of L down court twice in a row for fast break gimmes.

When Mangok Mathiang was Teed after a slam up for hanging on the rim/ slapping the glass/ or some infraction spotted only by the zebra with a whistle, The Rick ran onto the court apoplectic.

But when Jaylon Brown drained treys on consecutive possessions to push the visitors ahead 26-20, Pitino had had enough. I could feel the heat coming from his ears in the corner auxiliary press box.

Whatever the admonitions to his charges were, and what emphatic words the coach may have used to deliver them during that thirty seconds, the message was obviously heard. END_OF_DOCUMENT_TOKEN_TO_BE_REPLACED

A few observations about the Cards after the final tune up against crosstown foe Bellarmine.

Rick Pitino was not mincing words when he said postgame: “We have a lot of weaknesses we need to work on.”

They were masked in the opening half against the Knights. The visitors from Norris Place seemed blinded by the lights and the big stage.

Early on, Louisville used its superior speed, height and talent to overwhelm Scotty Davenport’s team. The Knights were spooked into 3/16 shooting (18.8%), and 16 turnovers before halftime.

The Cards ran and shot before halftime. Especially hitting half their treys. 7/14.

After the break, U of L showed how young they are, how much this edition of the Cards is a work in progress with a new O and new D to learn and execute, and what happens when they lose focus. END_OF_DOCUMENT_TOKEN_TO_BE_REPLACED

What a turn this is.

I have spared no barbs toward Dick Vitale through the decades, bemoaning his hyperbole, his lack of focus, and his self indulgent rants having nothing to do with the particular game he might be calling.

But now I have come to thank him for the good deed he’s done for U of L hoops.

For the presence in red & black of Ryan McMahon, who but for the tip to The Rick from The Mouth That Roared would never have become a Cardinal.

Do not misunderstand. I have perspective on the Floridian redshirt freshman. His eye opening debut stint came in the second half of an exhi against an overmatched, seriously weary bunch of Panthers.

I do not think he’ll become part of the Cards guard rotation this year. (Though it’s not such a far fetched consideration.) But what I do observe is this. The kid — and I can’t believe I’m actually going to type these words — “can flat out shoot the rock.”

What I do know. There are going to be games of importance during the four year stay of young Mr. McMahon, when the Cards will need points. When they’ll need that Hancockian four long ball fusillade to regain some ballast. When they’ll need some Hendersonian whodabelieve’dit string music off the bench.

Ryan McMahon shall be here to provide it. Write it down.

And that’s my bit of fawning Cardinal fandom coming out, after observing McMahon play nine garbage time minutes in a game that doesn’t even count.

Some other random observations from U of L’s 109-71 plunder of the Panthers from Kentucky Wesleyan: END_OF_DOCUMENT_TOKEN_TO_BE_REPLACED

Good teams should not lose at home come February.

Really good teams, i.e. legit contendas, do not lose at home in late February. Especially experienced ones on Senior Day.

Miami is a really good team. Miami is among those 20 or so schools that the pundits are saying could slip into the Final Four, and beyond. Miami, which starts three seniors and two juniors is experienced.

So, truth be told, the inevitable occurred yesterday in Coral Gables. On Senior Day, the Hurricanes did what really good teams do. They outplayed another good team, Louisville, down the stretch, and prevailed, 73-65.

What a difference 72 hours and a change of venue makes. END_OF_DOCUMENT_TOKEN_TO_BE_REPLACED

All things considered, U of L’s most impressive road W yet this season, 67-60 over the Pitt Panthers, should have been contested today, on Throwback Thursday.

For the manner of victory hearkened back to the First Golden Age of Louisville hoops, say, ’72-’86. Back then, on any number of occasions, the Cards would be contesting a good but beatable conference foe on the road. They’d fall behind, but, ever resolute, would pull back, and take a lead around midway through the final stanza.

The home team, eager for a victory over the Cards, would stay the course.

So, to close, Louisville would need to score every possession down the stretch. Which, on way more occasions than not, the Cardinals did.

Were my memory more intact, I’d recite chapter and verse. But, it isn’t.

But even with all those “program wins” the Cards have celebrated through the decades, I’m not sure I can recall one quite as prodigious as last night’s.

Of course, it was set up by one of Louisville’s worst interludes of the year, coughing it up on three consecutive possessions, when a 40-37 advantage morphed quickly into a 40-41 deficit. To which Pitt scored 7 more in a row.

END_OF_DOCUMENT_TOKEN_TO_BE_REPLACED

Beating Duke when it really matters confirms that life is good, and the basketball gods are shining their countenance down on the Cardinals.

Oh, and shame on me perhaps for admitting it in print, but we all know what our favorite moment is from yesterday’s come from 13 behind W.

With 12:58 to play, Jaylen Johnson did what every one of his Cardinal teammates loved, what every member of the L1C4 Nation loved, frankly, what college hoops fans across the land loved: He rocked a jackhammer elbow into the kisser of Grayson Allen.

As Christian Laettner was to the Land o’ College Hoops and most especially to the Big Blue Nation, Grayson Allen is to U of L. END_OF_DOCUMENT_TOKEN_TO_BE_REPLACED

I have been adamant, and have opined in this space as well as to any and all with whom I might have shared a conversation about the tallest Cardinal, that Matz Stockman “would never be a significant presence” while at U of L.

He seemed too slow, too clumsy footed, too mechanical, too reticent, to ever be a factor.

For that opinionation, I have been chastised, sometime with a knowing smile, more often with the virulence of a Republican presidential candidate going big game sport hunting against a fellow elephant, who is also in the running.

Those who criticized my criticism of the Louisville’s resident Norwegian were right.

Welcome to the Spin Zone.

Where there shall be no joking about a certain emerging U of L Cardinal’s ethnicity. No reference to last year’s Triple Crown winner. No analogy to Pyramids in the Paint. No hoops hieroglyphics.

No joking here, unlike The Rick, who, during his post game radio show after the Cardinals gutty 75-71 W over the Ramblin’ Wreck of Georgia Tech, proved he knows more about the Play Book than the Good Book.

Yo, Coach, it wasn’t the Egyptians forced to wander the desert, but, uh, vice versa. Anyway, that’s another discussion for another time.

Anas Mahmoud, spinning from the right block across the lane for a nifty floating hook shot, southpaw from the Brooklyn side.

Anas Mahmoud, spinning from the left block across the lane for a nifty floating hook with his stronger hand.

Anas Mahmoud, spinning from the right block, feigning a full traverse of the paint, stopping, switching the ball back from his left hand to his right, for a deft little five foot push floater.

Anas Mahmoud, grabbing the eminently loseable tilt by the short and curlies, thus spinning into the hearts of U of L Cardinal fans hither and yon. END_OF_DOCUMENT_TOKEN_TO_BE_REPLACED